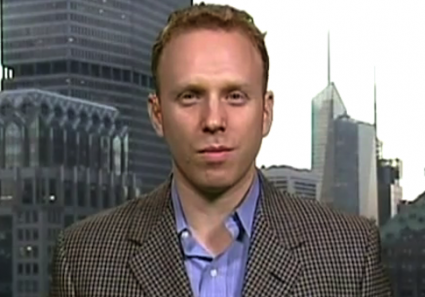 A Washington Free Beacon search of the forum found over 300 references to Max Blumenthal, with many threads praising his activism against both pro-Israel Americans and the Jewish state and encouraging other forum members to share and promote it.

"Max Blumenthal is insightful & sometimes funny," one thread is titled, with a forum member stating, "I respect Max Blumenthal more than I do ‘White Christian Zionists.'"

A forum member with the username "Kind Lampshade Maker"—and over 8,200 posts—started a thread titled "Jew Max Blumenthal has something good to say about Palin," citing a Blumenthal claim that former Alaska Republican Gov. Sarah Palin has ties to white supremacists.

Another thread promotes a video by Blumenthal whose title is so fitting for the neo-Nazi forum that it was posted under the title Blumenthal himself had for it: "How To Kill Goyim And Influence People."

A thread started by the alleged Kansas murderer himself is titled, "Israel Forming Super PAC to Attack [Ron] Paul and [President] Obama." Cross cites an appearance by Max Blumenthal on the Kremlin propaganda network RT in which Blumenthal claims that the Emergency Committee for Israel, a Washington-based nonprofit group, is in fact a front for Benjamin Netanyahu and is attempting to subvert the American political system.

In the RT interview, Blumenthal, citing his work for a Hezbollah-aligned Lebanese newspaper, says: "What I wrote about on Al-Akbar English is the degree to which Israeli Prime Minister Benjamin Netanyahu is completely immersed in the American presidential campaign and the culture wars of the United States … some of his cutouts, his neoconservative allies in Washington, have started this Super PAC, the Emergency Committee for Israel."

Responding to Blumenthal's claim, Cross, the alleged Kansas shooter, asks: "Will Ron Paul and his close supporters fight back against this alien Super PAC by telling the truth about jew power in the U.S.?? It's insightful and somewhat assuring that the above video news report was posted on www.runronpaul.com."

Cross goes on to complain that he could find "very little from MSM" on Blumenthal's claims about ECI and that "most internet reports are coming from Ron Paul sites."

The discussion touched off by Blumenthal shifts to the then-underway Republican presidential primary and the declining fortunes of Ron Paul.

"Big kike Bill Kristol, head of the Weekly Standard, and one of the godfathers of the neo-con movement," Cross comments, "said on CSPAN yesterday, that the Republican Party should dump Ron Paul, and that Paul running as a 3rd party candidate, is no big deal. Talk about freakin chutzpah. . . . ."

Cross's avatar in the VNN forum, where he has posted more than 12,000 times, depicts an animated militiaman performing the "Sieg Heil" Nazi salute in front of a Confederate battle flag.

Max Blumenthal responded to the murder spree carried out by one of his admirers by attacking Israel, discussing on the hate site Mondoweiss the similarities between Zionism and Frazier Glenn Cross's white supremacism.