The Islamic State (IS, also known as ISIS or ISIL) terror group has taken out advertisements offering to sell on the black market two of its captives, one from Norway and the other from China, according to full-page ads placed in the terror group’s propaganda magazine.

The advertisements, published in IS’s latest issue of Dabiq, a propaganda magazine detailing the group’s terror campaigns, list the two individuals as for sale to anyone who will "pay the ransom for his release and transfer," according to the ads, which were published Thursday by the Middle East Media Research Institute (MEMRI).

Included in the ads are multiple pictures of the captives and biographical details outlining their age and country of origin. Contact information for an encrypted Telegram application can be seen at the bottom of the listing, which is dubbed as a "limited time offer."

The offer to purchase the two captives is being made to other terror groups, "crusaders," and "human rights organizations." IS claims that both prisoners were "abandoned by their government, which did not do its utmost to purchase [their] freedom." 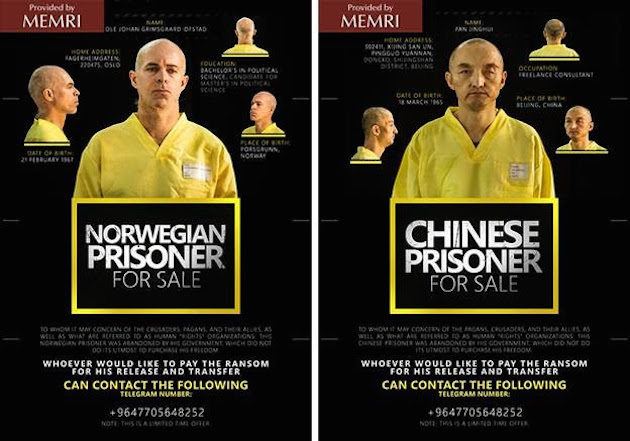 "Other articles include highlights of ISIS military actions; news from territory controlled by ISIS; and previous releases of ISIS videos and reports," according to the report.

The publication also urges those who cannot travel from their country of origin to join IS’s fight to carry out lone wolf attacks at home.

One article "encourages those who are unable to emigrate to the Islamic State to wage jihad in their own lands, and suggests specific cities and organizations to target," MEMRI reports.

"As for the Muslim who is unable to perform hijrah from dārul-kufr to the Khilāfah, then there is much opportunity for him to strike out against the kāfir enemies of the Islamic State," IS writes in the publication. "There are more than seventy crusader nations, tāghūt regimes, apostate armies, rāfidī militias, and sahwah factions for him to choose from. Their interests are located all over the world. He should not hesitate in striking them wherever he can."