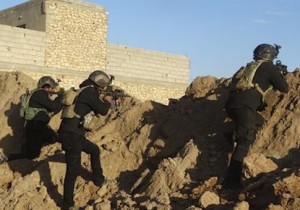 Islamic State militants in Iraq are threatening to kill civilians trying to flee Ramadi ahead of a ground operation by Iraqi forces to regain control of the city.

The Wall Street Journal reported that residents say the Islamic State intends to use civilians as human shields in the impending offensive. In recent days, Iraqi forces have urged residents via air-dropped leaflets to leave ahead of the operation to retake Ramadi, which the Islamic State captured in May.

One male resident said in a message to friends Monday that the Islamic State has been "encircling us from all sides preventing us from leaving the city." Snipers from the terrorist group have reportedly blocked the civilian exit route in the southern part of Ramadi.

According to U.S. military spokesman Col. Steve Warren, who is based in Baghdad, the Defense Department is aware that the Islamic State uses civilians as human shields and expects the terrorist group to do so in Ramadi. U.S. officials do not believe that Iraqi forces will wait to begin the ground offensive before all civilians leave the city.

At least 1,200 civilians are still residing in Ramadi, according to an Anbar provincial council member, who said few have left the city since the leaflets notified them of the offensive. Another estimate put the number of civilian residents much higher at between 5,000 and 6,000 families.

The U.S. estimates that between 600 and 1,000 Islamic State militants remain in the city.

News of the impending operation to retake Ramadi comes just after Defense Secretary Ash Carter said that the U.S. will send a specialized expeditionary force to Iraq to support the fight against the Islamic State. The force will conduct raids, capture Islamic State leaders, and gather intelligence.