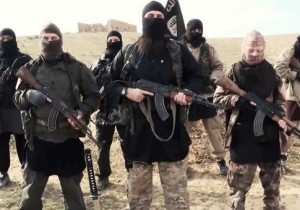 The Islamic State has continued to make gains in central Syria amid a barrage of Russian airstrikes that have mostly targeted rebel groups elsewhere in the country, according to reports.

The terrorist group is reported to have seized the town of Mahin in central Homs province during the weekend. Mahin is located near a strategic highway that links Homs to the capital Damascus. Islamic State militants also captured large arms depots in Mahin.

Additionally, the Islamic State (IS, also known as ISIS or ISIL) has taken control of some villages in eastern Aleppo province, the scene of intense clashes between rebel groups and Syrian government forces backed by Iranian troops and Russian airstrikes. The advances have allowed the terrorist group to expand from its current stronghold in northern and eastern Syria.

"ISIS maintains its ability to threaten both regime and rebel-held terrain, largely undeterred by Russian airstrikes," wrote Genevieve Casagrande and Jodi Brignola with the Institute for the Study of War. "ISIS continues to contest the regime-held town of Safira in the southeastern countryside of Aleppo, threatening the regime’s primary ground line of communication to Aleppo City."

They noted that the Islamic State’s capture of Mahin "may spark a response from Russian warplanes in the coming days."

However, Russian strikes in defense of Syrian President Bashar al-Assad’s regime have so far largely attacked the positions of rebel groups, including some that received TOW anti-tank missiles through a CIA program. Recent victories by the Islamic State, as well as Russia’s targeting of the rebels, appear to undermine Moscow’s claims that it is only combating terrorist groups.

"Russian airstrikes predominantly targeted rebel-held areas in Aleppo Province in conjunction with regime ground offensives against ISIS in the southeastern countryside of Aleppo and rebel forces southwest of Aleppo City," they said.

Russia’s intervention in support of Assad appears to have worsened the humanitarian crisis in Syria. The Syrian Observatory for Human Rights reported on Saturday that Syrian forces and Russian strikes killed at least 64 people in Aleppo, including 28 children.

The United Nations said last week that, in the areas under attack from Russian bombs, at least 120,000 civilians were forced to flee. Hospitals were also struck and women and children were killed with cluster bombs.

More than 250,000 people have been killed in the Syrian civil war and several million have been displaced.

The Obama administration recently announced that it would send up to 50 special operations forces into Syria to help advise U.S.-backed rebel groups. Talks aimed at ending the conflict have stalled amid disagreements about whether Assad should be allowed to stay as part of a political transition.