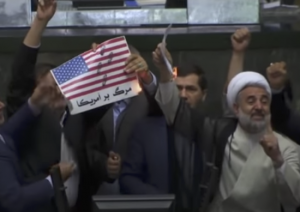 Members of the Iranian parliament set fire to a paper American flag Wednesday, shouting the familiar refrain of "death to America."

The lawmakers also torched a copy of the nuclear deal signed by former President Barack Obama, in what the Times of Israel and Haaretz report was an "impromptu" demonstration on the Parliament floor. Parliament Speaker Ali Larijani blamed "egotistical and amateurish" President Donald Trump and "Zionists" for pulling out of Obama’s deal that lifted sanctions on Iran in the hopes of controlling its nuclear program.

"With a national consensus, we will give the U.S. and Zionists a response that they will regret," Larijani said, according to the Mehr news agency.

"Aren’t such idiotic measures shameful for a country with a claim on global management that even its allies are trying to stop him from taking them and control him?" he asked, referring to European leaders’ support for the deal.

He also accused Trump of being mentally unfit to lead the U.S.

"Trump does not have the mental capacity to deal with issues," Larijani said.

In addition, Larijani said, "Europe and important countries like Russia and China" could fill the "vacuum" and help the deal continue.

The Trump administration took issue with various aspects of the deal, including its failure to address Iran’s ballistic missile program and the deal’s sunset provision loosening restrictions in the next decade. Trump called it "the worst deal ever" when he was running for president and said he would pull out if the deal were not substantially improved.

"America will not be held hostage to nuclear blackmail," Trump said in a speech announcing his decision. "We will not allow American cities to be threatened with destruction and we will not allow a regime that chants ‘death to America' to gain access to the most deadly weapons on Earth."

In Iran, demonstrations against America have been a common theme since the Islamic Revolution in 1979.