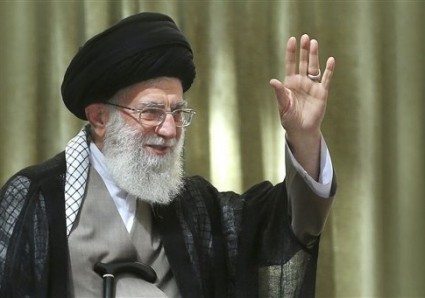 Iranian military leaders announced on Wednesday that Tehran is readying new mid-range and long-range missile defense systems reminiscent of Israel's Iron Dome system, which destroys rockets in mid-air before they strike the ground.

Brigadier General Farzad Esmayeeli, commander of Iran's Khatam ol-Anbia Air Defense Base, said on Wednesday that the latest defense systems will go online on September 22, according to comments made Wednesday to Iran's semi-official Fars News Agency.

The missile defense announcement comes as the successes of Israel's Iron Dome system are featured prominently in Western media outlets. Israeli officials have hailed the highly advanced system for protecting lives during the most recent conflict with Hamas by knocking many of the terror group’s attacks off course.

Esmayeeli, who did not reveal many technical details about the new equipment, said that the mid-range and long-range defense systems will be connected to Iran's larger military apparatus.

"These missile systems will include combined systems, artillery, and radar systems, other new systems," he was quoted as saying by Fars." The long-range missiles to go on display on September 22 are the ones which have been optimized by Iranian weapons experts and specialists."

As the Obama administration continues nuclear talks with Iran through November, Tehran's military forces have continued to build up their cache of advanced weaponry, including drones and sophisticated missiles.

Esmayeeli revealed that the construction of new drones and war planes had been fully authorized and paid for by the Iranian government, which is set to see another $2.8 billion cash infusion over the next several months as part of the deal reached last month to extend talks.

The construction of "new [manned] planes and pilotless drones" also is in the works, according to Esmayeeli.

Michael Rubin, a former Pentagon adviser on Iran and Iraq for the George W. Bush administration, said Iran has made "great strides" in its missile technology, though it is unlikely Tehran could rival the technology employed in Iron Dome.

"Could they build their own Iron Dome? Why not? Espionage goes both way," Rubin told the Washington Free Beacon. "And even if they seek a completely indigenous system, we often forget that adversaries can learn as much from failed experiments as from successful ones. Time is not on our side. Every month that passes narrows the gap between a resurgent Iran and a stagnant West."

When it comes to Iran's ballistic missile system for instance, Tehran has made "great strides," Rubin said. "And, when it comes to nuclear weapons, they are on the verge of becoming the next North Korea. Heck, some Iranian negotiators have actually described North Korea as a model to emulate rather than a country to condemn."

The announcement of these new missile defense systems and other weapons speaks to Iran's desire to flex its military muscle in region, and even the world, Rubin said.

"No one in the White House should underestimate the Iranian leadership and its determination," he said. "We may call Iran a ‘regional power’ but in its own rhetoric, Iranian officials describes themselves as a pan-regional power. Some of the regime’s ideologues actually believe they could be a global power and so they seek to match if not better whatever any competitor has."