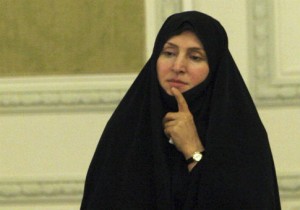 Iran’s foreign ministry on Wednesday reiterated its support for Hamas and other anti-Israel terrorist groups and said that aiding those who "stand against the Zionist regime is a principle of Iran’s policy."

The Islamic Republic’s renewed backing of Hamas comes amid reports that relations between the two have been strained in recent months. However, Iran denies that this is the case and made clear this week that it will continue to back terrorist entities that seek Israel’s destruction.

"Iran’s support for all resistance groups continues similar to the past," said Marzieh Afkham, a spokeswoman for Iran’s foreign ministry, to reporters in Tehran when asked whether the country’s position on Hamas had shifted.

Afkham went on to stress that "supporting members of the resistance front and those who stand against the Zionist regime is a principle of Iran’s policy," according to Iran’s state-controlled Fars News Agency.

These terrorist groups, with Iran’s support, will "stand on the frontline of war against the Zionist regime [and] would maintain their unity and integrity."

Iran’s renewed interest in and public support for Hamas is a sign that the Islamic Republic has no intention of moderating its extremist views in light of the recently secured nuclear deal, which officials in the Obama administration claimed would bring Iran into the global community of nations.

"To sell the deal, supporters of the JCPOA distort the facts about the Iranian  regime’s intention and plan to annihilate Israel," said Saeed Ghasseminejad, an Iran expert at the Foundation for Defense of Democracies. "All factions of the Islamic regime in Iran firmly believe that Israel must be destroyed, they just have different opinions about the best way to reach this goal."

Senior Iranian officials have claimed in recent weeks that Iran will expand its global terrorism agenda as a result of the deal.

Following the nuclear deal, Iran will "preserve its defensive capabilities and send weapons to its regional allies," according to Zarif.

Meanwhile, members of Hamas have praised Iran in recent comments and thanked the Islamic Republic for its support.

"Iran’s various supports for Palestine have been precious, abundant and greatly influenced the Palestinian resistance," Marzouk is reported to have said earlier this year.

More than 70 members of the Iranian parliament recently petitioned President Hassan Rouhani to increase "Iranian support for the regional resistance front after the nuclear agreement," according to the report.

Another top Iranian national security official, Javad Karimi Qoddousi, demanded this month that "all the senior Iranian officials … support aid for the Palestinian people and the resistance front so that the nuclear agreement [is not] exploited to strengthen Israel’s security."