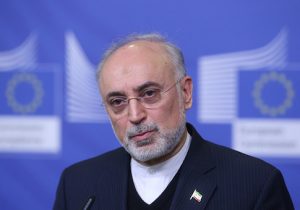 Senior Iranian leaders on Thursday signaled the country is on the brink of restarting its contested nuclear weapons program, disclosing the Islamic Republic is prepared to restart the full-scale enrichment of uranium, the key component in a nuclear weapon, if it does not continue to receive cash windfalls from European countries still committed to the landmark nuclear agreement.

Iran's warning represents a further escalation of its threats as the U.S. intelligence and security community identified Tehran as one of the top emerging global threats that could shake the international balance and arm the region with nuclear-capable ballistic missiles, according to a new U.S. threat assessment.

Iran's nuclear chief, Ali Akbar Salehi, disclosed Thursday that Iran is working to enrich uranium to extreme levels prohibited under the current accord. This work would enable Iran to stockpile large quantities of highly enriched uranium that are required to fuel a nuclear weapon.

"I would like to warn that this is not a bluff; I have kept my word whenever I've said something," Salehi was quoted as saying during a tour of Iran's Fordow nuclear facility, a contested military site that still has not be subjected to full international inspections. "Now I'm emphasizing once again that if the establishment wants, we can easily return to the 20-percent enrichment, and meet the country's needs at any level and volume."

Iran has the technological knowhow to almost immediately begin such a high-level of uranium enrichment and appears only to have refrained from doing so in a bid to preserve the nuclear deal, which provided Iran with billions in cash windfalls and economic relief.

"Enrichment is currently underway, but we would put aside the 300kg limit [set by the nuclear agreement] whenever we wish, and would do the enrichment at any volume and level," Salehi said. "We currently have 1,044 centrifuges in Fordow, and if the establishment wants, we will restart 20-percent uranium enrichment in Fordow."

Salehi said that 20 percent enrichment is "seen as well above the level suitable for fueling civilian power plants," a reference to the country's nuclear weapons work.

The U.S. intelligence community assesses this threat as credible, according to new assessments provided to congressional and political officials in both classified and unclassified forums.

In its end-of-year emerging threat assessment, the U.S. intelligence and security community disclosed Iran is "expanding its influence" in the military and cyber sectors.

"Iran will also likely continue to develop its military capabilities, including developing technology that could be used for intercontinental ballistic missiles (ICBM) and improving its offensive cyberspace operations," according to the new U.S. intelligence briefing, which was conducted across 45 government organizations including the State Department, Defense Department, Department of Homeland Security, and the Director of National Intelligence, among others.

"Iran is expanding its influence by increasing the size and capabilities of its network of military, intelligence, and surrogate forces, while increasing economic activities in other areas of the world," the unclassified version of the report notes. "Iran will also likely continue to develop its military capabilities, including developing technology that could be used for intercontinental ballistic missiles (ICBM) and improving its offensive cyberspace operations."

"Adversaries—such as Russia, Iran, and China—may engage in advanced information operations campaigns that use social media, artificial intelligence, and data analytics to undermine the United States and its allies," according to the report.

The threat is not just physical, the report says.

Iran, along with China and Russia, has stepped up its cyber operations and advances in the technology—such as artificial intelligence and sophisticated clandestine networks—are likely to amplify the threat over the next several years.

The U.S. intelligence community assesses that these countries have the potential to employ newer technologies to track, monitor, and pilfer information from top U.S. military and security officials.

"Future advances in AI, sensors, data analytics, and space-based platforms could create an environment of ‘ubiquitous ISR', where people and equipment could be tracked throughout the world in near-real time," according to the report. "China, Russia, Iran, and North Korea are developing multiple ISR platforms."

Each of these nations is increasingly deploying advanced technologies against the United States. The extent and sophistication of these operations is expected to increase in the next years, posing a problem to the United States, which historically has lagged behind in such areas.

"Adversaries, such as China, Russia, Iran, and North Korea, may launch cyber attacks against critical U.S. infrastructure," including, "electric, oil and gas, and nuclear power systems," as well as "military infrastructure (e.g., communications and ISR platforms)," according to the report. "Adversaries could also launch cyber attacks on the U.S. health care system, threatening patient safety by disrupting access to medical care. Finally, adversaries are also developing tools to directly attack hardware and embedded components in aviation systems, which can manipulate or destroy data."