At a hearing Tuesday on U.S. and foreign long-range, rapid attack capabilities, known in the Pentagon as prompt global strike, the chairman of the strategic forces subcommittee, Rep. Mike Rogers, made public a document outlining French-Russian hypersonic missile collaboration.

According to the document, which is labeled "unclassified," the graphic reveals how the French defense company MBDA Missile Systems and ONERA, the French national aerospace research center, are working with Raduga, a Russian missile manufacturer, and Rosoboronoexport, the Russian state arms company, to develop a hypersonic missile capable of reaching speeds of Mach 4 to Mach 8, or 3,069 miles per hour to 6,138 miles per hour.

The chart describes the flight test sequence of a Russian jet-powered hypersonic missile launched from a Tu-22 bomber and initially powered by a first stage derived from an "A84" missile.

After accelerating, the jet-powered missile flies for between 20 and 30 seconds at Mach 4 to Mach 8 over a distance of up to 25 miles before crashing. The missile send telemetry signals to an airborne receiver during the flight. 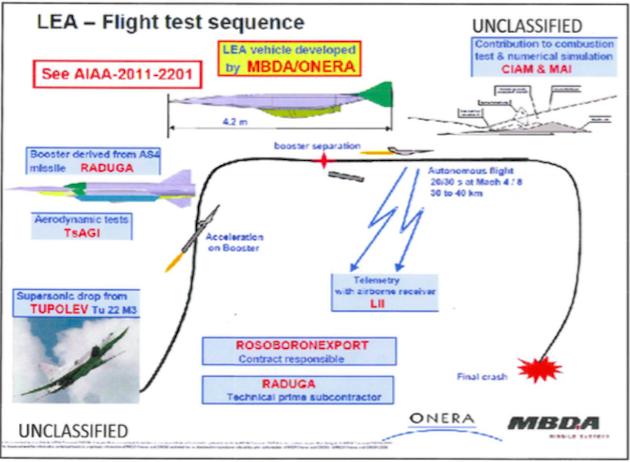 Rogers did not provide further details about the missile technology cooperation or whether the U.S. government is aware of it.

The missile cooperation appears to violate U.S. and NATO sanctions imposed on Russia for its military annexation of Ukraine’s Crimea. The sanctions prohibit exports of military goods.

Rosoboronoexport was hit with U.S. economic sanctions in September for illicit arms sales to Iran, North Korea, and Syria.

Spokesman for MBDA and ONERA did not respond to email requests for comment. A spokesman at the Russian embassy could not be reached for comment.

Rogers, the subcommittee chairman, said government studies since the 1990s have shown the need for developing a prompt, non-nuclear strategic strike capability, but said that it has not been developed.

The U.S. concept behind prompt global strike weapons is to develop high-technology conventional arms capable of hitting any target on earth within 30 minutes to an hour. Potential targets for the weapons include terrorist leaders, or deeply buried sites for developing nuclear, biological or chemical weapons and delivery systems.

The problem has been compounded by foreign long-range strike weapons development. Rogers, in a statement, noted Washington Free Beacon reports on six Chinese test of a new hypersonic strike vehicle, indicating the it is a high priority weapons program for Beijing.

"I am greatly worried that the United States stands the risk of losing the next arms race to Russia and China," Rogers said. "In fact, I’m worried we aren’t even in the race yet—we’re still trying to tie our shoe laces in the starting block."

Rogers made the comments during a hearing with Kehler and two other experts on prompt global strike. The experts testified that both Russia and China are developing nuclear and conventional rapid long-range attack capabilities.

"In November 2014 a Russian defense industry executive announced that Russia would have an air-launched hypersonic missile by 2020," he added.

On China, Scheber noted that China conducted six test of a hypersonic glide vehicle designed to be launched from a long-range missile.

"The vehicle, dubbed DF-ZF in press reports, is described as capable of maneuvering to avoid defenses and gliding to its target at speeds up to ten times the speed of sound, i.e., hypersonic," he said, noting that the "DF-ZF could carry either a nuclear warhead or perform non-nuclear strike missions."

James Acton, a physicist, and co-director of the Nuclear Policy Program at the Carnegie Endowment for International Peace, said he has studied both Russian and Chinese hypersonic weapons development.

Russia has been interested in advanced high-speed weapons since the 1980s as a means to defeat strategic missile defenses.

"Their current incarnation is reportedly known as Project 4202," Acton testified, noting three or four hypersonic glider tests since 2011, including at least two failures.

"The range of Russia’s glider is not known although it appears to be substantially longer than China’s," Acton said.

"Russia’s primary goal is almost certainly still to ensure that it can continue to deliver nuclear warheads through U.S. missile defenses," he said. "It may also seek to develop conventional boost-glide weapons. Converting a glider designed to deliver nuclear warheads into one capable of delivering conventional warheads would, however, be a major undertaking since the accuracy requirements for a conventionally armed missile are significantly more demanding."

"The development of such gliders severely exacerbates the engineering challenges associated with shorter-range systems, such as managing the heat that is generated through atmospheric friction," Acton said.

With sufficient time and resources, China is expected to deal with the problems.

"However, the development of long-range gliders is unlikely to be quick or painless," Acton said. "It is certainly not a case of just putting a glider never tested at long ranges, and perhaps not designed for long-range flight, on top of a more powerful booster."

Rogers also said he was concerned by Russian disclosure of a new unmanned underwater drone capable of delivering a nuclear warhead over long distances.

The drone submarine, first disclosed by the Free Beacon, was confirmed by Russia through a document made public on state-run television.

"According to the Russian translations of what was disclosed, this weapon would provide Russia with a new capability to damage, ‘the important components of the adversary's economy in coastal area and inflicting unacceptable damage to the country's territory by creating areas of wide radioactive contamination that would be unsustainable for military, economic or other activity for long periods of time,’" Rogers said.

"Couple this with their dangerous nuclear doctrine and public statements, and we should all be seriously concerned," he added.

Kehler said Moscow’s disclosure of the new underwater nuclear weapon was intended to pressure the United States to "take their concerns into account" at the same time they are seeking to "change the strategic game."

"They want to make sure that they are reminding us that they can hold us at risk," he said. "It smacks of a returning to a Cold War kind of an approach here that maybe I naively thought we were past of that."

Kehler said he was worried that Russian insecurity will lead to instability.