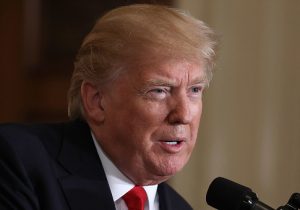 Federal authorities scrambled to redact and keep classified key information revealing major abuses of the U.S. surveillance apparatus that targeted President Donald Trump's associates in the lead up to the 2016 election, according to multiple sources familiar with the situation who said the latest information corroborates findings recently made public by House Intelligence Committee officials.

On the heels of the release of a classified memo by Republicans on the House Intelligence Committee disclosing that the FBI relied heavily on a widely discredited anti-Trump dossier to carry out unwarranted surveillance on Trump allies, Senate investigators this week made public their own findings that appear to corroborate the events.

The new criminal referral issued by Sens. Chuck Grassley and Lindsay Graham, both Senate Judiciary Committee members, calls for a formal investigation into Christopher Steele, the onetime British spy who compiled the dossier on behalf of the Democratic National Committee and Democratic presidential candidate Hillary Clinton.

The latest details, which detail alleged spy abuses, are likely to complicate efforts by Democratic leaders to rebut the allegations and keep the public focused on the continuing investigation into claims the Trump campaign colluded with Russia.

Grassley and Graham's memo, released this week, alleges the FBI relied heavily on Steele's research to obtain spy authorization from the Foreign Intelligence Surveillance Court, a top-secret court that that signs off on such domestic spy operations.

This was done despite Steele's work having been paid for by the Democrat National Committee and the Hillary Clinton campaign. The information provided in the memo paints what insiders described as a startling campaign by the FBI and Justice Department to open a surveillance operation into Trump associates based on highly dubious information contained in the Steele dossier.

Congressional sources with knowledge of the situation told the Washington Free Beacon that federal authorities scrambled behind-the-scenes to redact this information and keep it classified not for national security reasons, but to ensure this damaging information never reached the public's eyes.

The latest information corroborates what Republicans on the House Intelligence Committee discovered in their own memo and could subsequently undermine efforts by their Democratic counterparts to paint that initial memo as bunk.

"The Feds had stonewalled the House Intelligence Committee's attempts to get this information for months," said one senior congressional official with knowledge of the situation. "Then, when Grassley and Graham tried to make the information public, the Feds redacted nearly their whole memo."

The newly disclosed information in the Grassley-Graham memo—which was first issued with heavy redactions at the FBI's behest—appears to corroborate most of what was publicized in the House Intelligence Committee memo, which was released publicly last week after Trump's authorization.

Grassley and Graham rereleased their memo after petitioning the FBI to scale back heavy redactions it made in the original version cleared for public release.

"If you compare that version of the Grassley memo to the new version with less redactions, it's clear the redactions had nothing to do with national security, and everything to do with trying to keep embarrassing information from getting out," the source said.

Accusations that the FBI and Justice Department unjustly spied on Trump associates in order to bolster the Democrats are further corroborated in the newly unredacted Grassley-Graham memo.

"It appears the FBI relied on admittedly uncorroborated information, funded by and obtained for Secretary Clinton's presidential campaign, in order to conduct surveillance of an associate of the opposing presidential candidate," the senators wrote in their memo.

"It did so based on Mr. Steele's personal credibility and presumably having faith in his process of obtaining the information," it continues. "But there is substantial evidence suggesting that Mr. Steele materially misled the FBI about a key aspect of his dossier efforts, one which bears on his credibility."

The spy authorization, which was granted under FISA laws, appears to have relied heavily on Steele's research, but was granted without disclosure that the Clinton campaign and Democrats paid for the information—a revelation that could undermine the FBI and DOJ's defense of the secret surveillance campaign.

The FBI continued to testify in its surveillance renewal applications that Steele was not a source for a Yahoo News article that reported some of his allegations even after British court documents became public showing that Steele had indeed briefed Yahoo News on his research.

This move has fueled accusations the agency was running a highly politicized surveillance operation meant to help then-candidate Clinton.

The new memo also finds that Clinton campaign associates were funneling information to Steele that was later passed to the FBI.

While Democrats on the House Intelligence Committee have drafted their own memo to rebut allegations contained in Nunes's original release, they may be facing an uphill battle in light of the information provided by Grassley and Graham.

Any document released by House Democrats would have to address new allegations the FBI sought to redact information in a bid to keep its alleged foibles out of the public spotlight, sources said.

"The Democrats' memo is already finished, so it won't take into account all the information that came out from Senators Grassley and Graham," said the senior congressional official. "So they'll be rebutting the Nunes memo without even mentioning the fact that the information has been confirmed, and expanded upon, in the Senate."

The Washington Free Beacon employed Fusion GPS for political opposition research during the presidential primary campaign but had no involvement in the Steele dossier. For more information, see here.