The man arrested for sending threatening letters containing white powder to the home of Donald Trump Jr. shared news reports on the police response to his handiwork on a politically focused Facebook profile that appears to belong to him.

The Justice Department announced that Daniel Frisiello of Beverly, Mass., was arrested and charged on Thursday morning after it determined he was behind the sending of at least five letters to high-profile individuals containing threatening notes and a white powder.

A Facebook profile belonging to a Daniel Frisiello of Beverly, Mass., reveals a politically obsessed individual who regularly shares negative posts about President Trump and his family, and even shared an ABC report on the fallout from the letter he is accused of sending to Trump Jr.'s apartment in New York City. 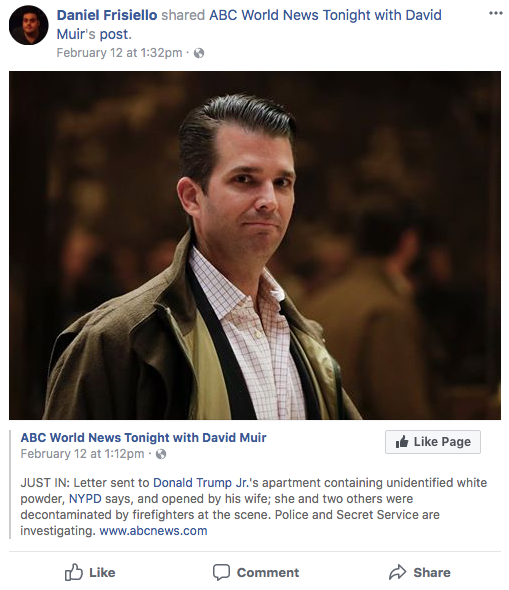 Other Facebook users quickly seized on the fact that he posted about the threatening letters on his page, with one writing, "Dude you actually posted about your own crime? Get help you sick fk."

His other Facebook posts reveal a deep hatred for the Trump family and Republicans in general. In one post from earlier this February he compared President Trump to Adolf Hitler. 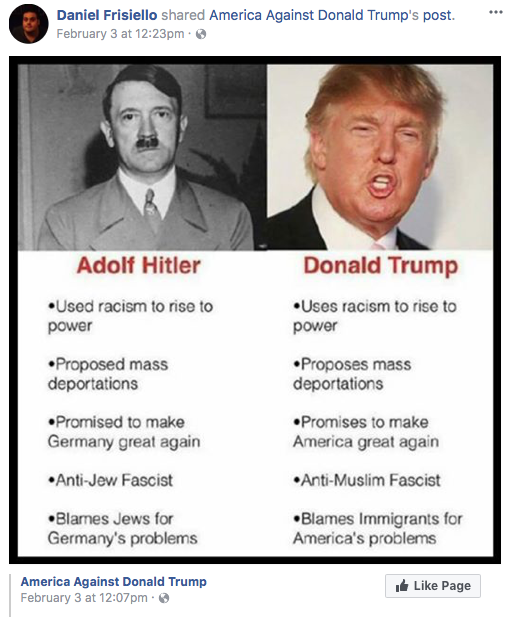 More recently, Frisiello shared a post from "Boycott All Things Trump" indicating the president had blood on his hands from the recent school shooting in Florida that killed 17. 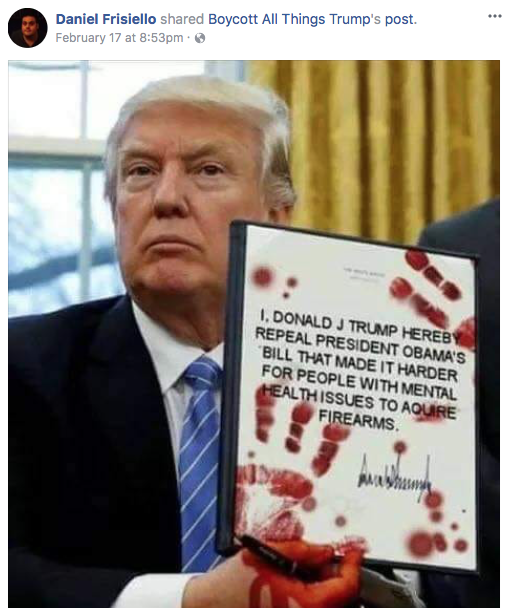 Frisiello has also posted on his page that he donated to the March for Our Lives group started by students at the school, celebrated North Korea during a spat with Trump, and supports Tom Steyer's movement to have Trump impeached.

The Justice Department revealed the contents of the note Frisiello sent to Trump Jr.

"You are an awful, awful person, I am surprised that your father lets you speak on TV," the note said, according to a Justice Department release. "You make the family idiot, Eric, look smart. This is the reason why people hate you, so you are getting what you deserve. So shut the **** UP!"

On February 7, the day DOJ says the letter was sent, Frisiello was posting about Democratic House Minority Leader Nancy Pelosi's six hour speech on the House floor on the immigration debate.

Frisiello's most recent posts on his profile, which remains public, came on Wednesday, and included anti-Trump posts.