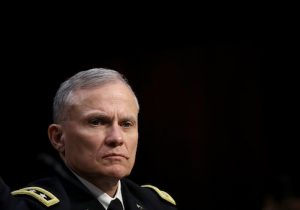 China is rapidly expanding its nuclear forces with new missiles, submarines, and bombers and will double its warhead stockpile in the coming decade, the director of the Defense Intelligence Agency said this week.

DIA director Army Lt. Gen. Robert P. Ashley also said in a speech Wednesday that Russia is building large numbers of tactical nuclear weapons in addition to new strategic weapons, including an earth-penetrating nuclear warhead similar to a weapon canceled by the United States years ago under pressure from anti-nuclear activists in Congress.

On China's nuclear forces, Ashley stated: "Over the next decade, China is likely to at least double the size of its nuclear stockpile in the course of implementing the most rapid expansion and diversification of its nuclear arsenal in China's history."

The three-star general noted that last year alone China conducted more ballistic missile tests in developing and training than those carried out by the rest of the world combined.

"We expect this modernization to continue, and this trajectory is consistent with Chinese president Xi's vision for China's military, which he laid out at the 19th Party Congress and stated that China's military will be ‘fully transformed into a first tier force' by 2050," Ashely said in a speech to a Washington think tank.

China's warhead totals are not fully known as a result of military secrecy, but Ashley said the estimate is that the current arsenal includes "low, couple hundred" warheads.

Other estimates have put the number of warheads hidden in underground bunkers to be from several hundred to as many as a thousand.

China's nuclear forces are shrouded in secrecy and include a network of nuclear storage and production facilities dubbed the Great Underground Wall that is estimated to be some 3,000 miles long.

The DIA director also stated, in a setback for arms control advocates who have pushed for U.S. ratification of a nuclear test ban treaty, that intelligence indicates both China and Russia have facilities and have conducted small nuclear tests in apparent violation of a commitment to zero nuclear tests under the 1996 Comprehensive Test Ban Treaty, or CTBT.

Asked if Chinese nuclear modernization is not in compliance with CTBT curbs, Ashley said: "That's our belief in terms of what we're seeing with the testing regime."

China's military is attempting to rapidly advance its nuclear forces, which in the past were limited. The first Chinese mobile intercontinental-range missile was deployed around 2000, he said.

"So part of that rapid growth is because the capability did not exist in the kind of capacity that Russia or the U.S. has had in the past," Ashely said. "So that has been a significant investment that they've made in terms of them catching up [with] capacity over the course of the last 15 years."

The Chinese also are building a new strategic bomber that will give Beijing its first triad of weapons—land-based, sea-based, and bomber-delivered strike weapons.

Ashley said the buildup shows "China's commitment to expanding the role and centrality of nuclear forces in Beijing's military aspirations."

Its forces also include nuclear-tipped short-range precision strike weapons similar to those being developed by the Russians.

"While China's overall arsenal is assessed to be much smaller than Russia's, that does not make this trend any less concerning," Ashley said.

China has announced it will not be the first to use nuclear weapons in a conflict and also would not use nuclear arms against non-nuclear states.

"But at the end of the day if something becomes an existential threat, it's difficult to say that [using nuclear weapons first] would not become something in their decision calculus because they have not specifically stated it," he said.

China is also increasing the reliance in their strategy on using nuclear weapons.

"And it's not just in the nuclear," he said. "If you look at all the domains, what they have done in terms of modernizing the military across aviation, and a big area not the subject of this topic is really the space/counterpace aspect of how the Chinese are approaching warfighting from every domain. But there is a significant investment in their nuclear forces."

Of their main nuclear testing facility, known as Lop Nur, in western China, Ashley revealed the Chinese are preparing to operate the site year round—an indication of "China's growing goals for its nuclear forces."

Also, China has continued to conduct tests using explosive containment chambers at its nuclear test site and Chinese leaders in the past joined Russia in watering down language in a declaration by nuclear weapons states that undermined a widely understood concept of "zero yield" nuclear tests.

"The combination of these facts and China's lack of transparency on their nuclear testing activities raise questions as to whether China could achieve such progress without activities inconsistent with the Comprehensive Nuclear-Test-Ban Treaty," Ashley said.

The small underground nuclear tests have been detected as early as 1996 at a facility in northern Russia called Novaya Zemlya. The testing violations at the time were covered up by the State Department during the administration of President Bill Clinton. The department claimed there were no CTBT violations by Moscow.

Ashley also said that, in addition to the nuclear modernization, both China and Russia are developing weapons based on advanced and emerging technology with the potential to "revolutionize undersea warfare and challenge U.S. superiority in the maritime domain."

Ashley did not elaborate on China's high-technology undersea warfare weapons. But he noted Russian development of a long-range nuclear drone submarine armed with a nuclear warhead.

The weapon called the Kanyon by the Pentagon was first disclosed by the Washington Free Beacon in 2015.

"Russia's development of new warhead designs and overall stockpile management efforts have been enhanced by its approach to nuclear testing," Ashely said. "The United States believes that Russia probably is not adhering to its nuclear testing moratorium in a manner consistent with the ‘zero-yield' standard."

The Senate rejected ratifying the CTBT in October 1999 over concerns its anti-testing provisions could not be verified and concerns about cheating. The treaty ratification battle was led by then-Sen. Joseph Biden who later became vice president in the Obama administration and is leading Democratic candidates in the 2020 presidential race.

"After working together for decades to achieve real nuclear reductions, Russia is upgrading the capacity of its nuclear forces," Ashley said. "We assess its overall nuclear stockpile is likely to grow significantly over the next decade."

A major worry is the large increases in smaller or non-strategic nuclear warheads that can be fired from ships, aircraft, and ground forces designed, Ashley said, to deter and defeat either the NATO alliance or China in a conflict.

"Russia's stockpile of non-strategic nuclear weapons—already large and diverse—is being modernized with an eye towards greater accuracy, longer ranges, and lower yields to suit their potential warfighting role," he said.

Dozens of small nuclear weapons systems have been deployed or are in development including short- and close-range ballistic missiles, ground-launched cruise missiles, including the 9M729 missile, which violates the Intermediate-Range Nuclear Forces or INF Treaty. Russian small nuclear forces also are being prepared for firing from antiship and antisubmarine missiles, torpedoes, and depth charges. The total Russian small warhead stockpile is around 2,000 weapons.

By comparison, the United States has deployed a single non-strategic nuclear weapon, the B-61 gravity bomb.

"In addition to the anticipated growth in non-strategic nuclear weapons, Russia claims to be developing new warhead designs for strategic systems, such as new high-yield and earth-penetrating warheads to attack hardened military targets like U.S., allied, and Chinese command and control facilities," Ashley said.

U.S. plans for an earth-penetrating nuclear weapon needed to penetrate deep underground targets like those used by the militaries in China, Russia, North Korea, and Iran, were scrapped in 2005 after anti-nuclear activists pressed Congress to cut off funding for the weapon.

Ashely said Russia's nuclear forces are being greatly enhanced by the modernization of the past several years. The new weapons include multiple warhead SS-27s that provide Moscow with the ability to upload or increase the number of warheads in a time of crisis. A new Sarmat ICBM will carry more than 10 warheads on each missile and will be capable of launching a new hypersonic strike vehicle called the Avanguard.

Additionally, Russia is modernizing an automated nuclear command and control launch system called Perimeter. The Cold War-era system was also known as the "Dead Hand" system that is capable of launching an all-out nuclear strike without human intervention in the event Russian leaders were killed in a nuclear first-strike.

Ashley said by ignoring the zero-yield limit, the Russians will be able to upgrade their warheads with modern weapons designs.

A reporter for Reuters asked Ashley if China and Russia were building up their nuclear forces as a result of what the reporter termed a "massive" U.S. modernization.

The DIA chief said both China and Russia regard the United States as a competitor and are working on developing nuclear deterrence against U.S. or allied forces.

"So I think it's a natural evolution that they have those capabilities that they shore up their defenses and it's not just on the nuclear side of the house," he said. "It's maritime, it's space/counterspace. Really it's a whole modernization across multiple domains."