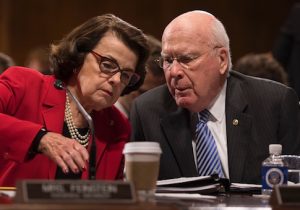 Senate leaders have added the Taylor Force Act to the omnibus spending bill after two Democratic senators blocked an effort to pass it as a stand-alone bill. The measure would cut off U.S. aid to the Palestinian Authority as punishment for its practice of paying salaries and benefits to terrorists and their families, including those who have murdered Americans.

The Taylor Force Act boasts strong bipartisan support, prompting Senate leadership a few weeks ago to hotline the bill, which would set it up to pass by unanimous consent, a parliamentary procedure that expedites passage of noncontroversial legislation. If no senator objects to the move, the measure is passed without the need for a floor vote.

But the Taylor Force Act was blocked after Democratic senators Patrick Leahy of Vermont and Dianne Feinstein of California rejected the hotline, killing the unanimous consent process and forcing the bill to undergo the Senate's lengthy cloture process, several sources told the Washington Free Beacon. Neither Leahy nor Feinstein have publicly opposed the bill.

A spokesman for Sen. Leahy, David Carle, did not deny that the senator objected to unanimous consent, claiming that Leahy "sought an opportunity to refine the bill … and there was no opportunity to debate or offer amendments." When asked whether Sen. Leahy had sought to refine the bill or offer amendments at any point during the six months from February 2017, when it was introduced, to August 2017, when it was debated and then passed out of the Senate Foreign Relations Committee, Mr. Carle suggested that Sen. Leahy was unable to.

"He's not on SFRC," Carle said in an emailed response. "He sought the opportunity to discuss refinements, which is the regular process in the Senate."

Sen. Feinstein's office did not respond to a Free Beacon request for comment.

The objections by Leahy and Feinstein compelled leadership to tack the measure onto the Senate's $1.3 trillion spending package to avoid further delays. Congress has until midnight Friday to approve the appropriations measure in order to avert a government shutdown.

The Taylor Force Act would halt American funding to the Palestinian Authority until it ends its "pay to slay" policy, which distributes $300 million to terrorists and their families annually.

The bill sailed through the House in December, but stalled in the Senate after Republican members demanded the removal of a sunset provision requiring Congress to renew the measure in 2024. The Senate version, introduced last year by Sen. Lindsey Graham (R., S.C.), also precluded exemptions for vaccinations for children and wastewater projects.

Senate Minority Leader Chuck Schumer pledged in February to do "everything" possible to pass the measure, but Democrats on the House Foreign Affairs Committee, led by Rep. Eliot Engel (D., N.Y.), demanded the joint bill include a $37 million exemption for waste water treatment funding and an exemption for vaccination programs. The bill already exempted from cuts all aid that was deemed to not "directly benefit" the Palestinian Authority.

"After over two years of very hard work, we are on the verge of having the Taylor Force Act become law," Graham said in a statement Wednesday night. "This was truly a bipartisan effort and I appreciate Senator Mitch McConnell, Senate Foreign Relations Committee Chairman Bob Corker, Senator Chuck Schumer, House Speaker Paul Ryan, Chairman and Ranking Member of the House Committee on Foreign Affairs Ed Royce and Eliot Engel, and many others for helping push it across the finish line."

The measure is named in honor of U.S. Army veteran Taylor Force, who was stabbed to death by a Palestinian terrorist last year while on a Vanderbilt University tour in Tel Aviv.