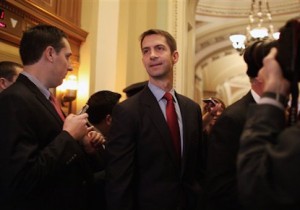 Cotton said that as the Obama administration pursues diplomacy with Iran in light of another extension in the nuclear negotiations, Congress should be stepping up pressure on Tehran and considering the "credible use a force," a policy that would include arming Israel with the advanced technology needed to strike at Iran’s nuclear sites.

"In my opinion, the negotiations were a grievous mistake from the beginning, and they quickly became a sham; now they’re a farce," Cotton told a group of reporters on the sidelines of the Foreign Policy Initiative’s (FPI) annual forum.

Congress must step up early next year "to reimpose the sanctions" on Iran that have been lifted by executive order by the Obama administration, Cotton said.

Any congressional action related to Iran "has to be, obviously, backed by credible use of force," he said, adding that Congress should take a "serious look" at providing to the Israeli military hardware necessary to carry out a strike on Iran.

This would include high-tech B-52 bomber planes, as well as 30,000-pound bunker buster bombs that are capable of penetrating deep into Iran’s fortified and underground nuclear research sites.

This type of move could "send the right signal to our allies in the region and to the regime in Iran," Cotton said.

Rep. Mike Pompeo (R., Kan.), a member of the House Permanent Select Committee on Intelligence, also discussed with reporters the logistics of carrying out a potential strike on Iran.

Effectively striking Iran’s nuclear sites is not as complicated as some believe, Pompeo said.

"It sometimes seems insurmountable; that there’s no way we could take it on," he said. "If you stop the negotiation, what does that mean?"

"In an unclassified setting, it takes under 2,000 sorties to destroy the Iranian nuclear capacity," Pompeo revealed. "This is not an insurmountable task for the coalition forces, some of them we could very readily do, and we’d have to make clear to the [Iranian] regime that that was our intention."

"We’d have to explain to them [Iran] what the prerequisites are in order to avoid such a fate," he continued. "I’m convinced we can do so."

Such a strike could set Iran’s nuclear program back by 24-36 months, Pompeo said.

"The engineers, the technology, the knowledge, the blue prints will still exist," he said. "I’ll concede that. It’s not a problem that is going to be eliminated. It is eliminated when the regime changes."

The lawmakers also hinted that the Obama administration has been conducting its own diplomacy with Iran behind the scenes, potentially on the issue of partnering with Tehran to combat the Islamic State in Iraq.

"Well, we sent them letters," Pompeo said, referring to the disclosure of several letters sent by President Obama to Iranian Supreme Leader Ali Khamenei. "There are absolutely discussions going on."

As nuclear negotiations with Iran continue, the regime is marching toward a nuclear weapon, Cotton warned.

"Congress’ role will be to put an end to these negotiations," Cotton said. "Iran is getting everything that it wants in slow motion, so why would they ever reach a final agreement?"

"They’ve got just about 5 billion dollars in sanctions relief over the next seven months," he continued. "But we keep conceding on uranium enrichment and centrifuges, and plutonium production, ballistic missile production, lack of true disclosure and verification."

"So I think the adults in Congress need to step in early in the new year" to reimpose sanctions and pass legislation that would give the Senate final say over any potential deal that is struck with Iran, he said.