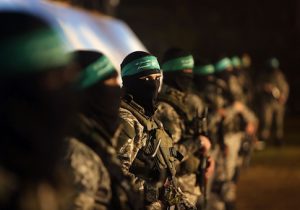 Congressional leaders advanced several key pieces of legislation on Wednesday that would cut off U.S. taxpayer aid to the Palestinians and crackdown on Iran's financial support for the terror group Hamas, legislative efforts that are being helped along by the Trump administration, according to multiple U.S. officials who spoke to the Washington Free Beacon.

The House Foreign Affairs Committee, in a bipartisan vote, approved three pieces of legislation that will cut off U.S. aid to the Palestinian government and help prevent American businesses from doing business with Hamas and other Iranian-tied terror groups.

One of the bills, the Taylor Force Act, which would slash U.S. aid to the Palestinians until they stop using the money to pay salaries to imprisoned terrorists and their families, received support from the White House, which is said to have played a central role in ensuring the proposed legislation garnered bipartisan support.

The new bills are said to be part of a larger effort by congressional leaders to shutdown longstanding U.S. aid programs that have supported terrorist fighters and organizations across the Middle East. The advancement of the Taylor Force Act and these other bills is meant to send a message that the United States will no longer keep its coffers open to those who enable terrorism against Israel and U.S. allies in the region.

The Taylor Force Act, which has been working its way through Congress for some time, has become the centerpiece of the joint effort by Congress and the Trump administration to rein in Palestinian intransigence, U.S. officials told the Free Beacon.

"The Trump administration strongly supports the Taylor Force Act, and the White House has communicated that support to Congress and in public statements," Victoria Coates, a senior White House National Security Council member who played a central role in pushing the legislation, told the Free Beacon.

Coates said that recent reports alleging the Trump administration sought to water down the bill in order to avoid upsetting the Palestinian government and negatively impacting diplomatic efforts to restart the Israeli-Palestinian peace process are false.

"Reports to the contrary, including that anyone at the White House tried to water this legislation down, are false," Coates maintained. "Palestinian Authority payments to terrorists and their families that incentivize violence are unacceptable, and must stop."

Cutting off U.S. aid that helps support Palestinian terrorists is just one part of an effort by the Trump administration to help reform the Palestinian government and legitimize its leaders.

"We also believe that economic development in the West Bank and Gaza Strip can play an important role in preparing the region for a lasting peace agreement," Coates aid.  "To this end, we have invested and encouraged other partners to invest in critical infrastructure that will underpin economic growth, including through partnerships with local governments, the private sector, and a wide range of other partners."

The Trump administration reprogrammed $13 million last month to help support a waste-water treatment facility in the Palestinian-controlled city of Jericho, according to Coates, who said this money will help Palestinian farmers support their crops.

"At the president's direction we want to continue this important work," Coates said. "But all of our partners must be engaged in building a foundation for peace, not for continued incitement and violence."

In addition to the Taylor Force Act, House lawmakers on the Foreign Affairs Committee approved a new bill that would require the U.S. government to expose the identities of foreign states, individuals, and other actors who have provided material support to Hamas and other Palestinian terror groups.

The proposed legislation—which would pave the way for the United States to suspend aid and seize the assets of any foreign entity found to be financially helping these terror groups—is said to be part of an effort to combat Iran's efforts to forge closer ties with Hamas, Hezbollah, and other anti-Israel terrorist actors.

A third bill that made its way out of the committee seeks to crackdown on Hamas' use of human shields in battle. The legislation would, "hold Hamas and its sponsor, Iran, accountable for this monstrous practice," according to Rep. Ed Royce (R, Calif.), the committee's chairman.

"A lot of the impetus is Iran," Mast told the Free Beacon.

"The term often used is Iranian proxies. But that's the wrong term to use. It really needs to be classified as Iranian colonization of the Middle East," Mast said, explaining that Iran's presence can be seen among every bad actor in the region. "This is colonization. They have a very long-term view. Hezbollah has been at this for 30 plus years. They have a long term goal and its colonization."

Mast also expressed support for the Taylor Force Act, which he said does not go far enough in cutting off U.S. aid to the Palestinians.

If Mast had his way, "there wouldn't be resources going towards Palestinians labeled aid or anything else."

"To think we're going to take a dollar out of somebody's pocket here and send it over there to somebody's family because they went out there and bombed a boss of shot somebody, or ran somebody over with a car, that goes way beyond the realm of common sense," Mast said.

"I am very pleased that the House Foreign Affairs Committee was able to pass the Taylor Force Act with bipartisan support," Lamborn said. "This is an important first step in stopping U.S. tax dollars from funding Palestinian terrorism."

"The next step is to bring it to the House floor and ultimately send it to the president's desk," Lamborn said. "Passing the Taylor Force Act is the moral and right thing to do in a world that is riddled with terrorism, it sends an important message to the world: America will not tolerate foreign entities that receive U.S. aid to finance terrorism."