In February 2012 one of the most unusual political dramas in years played out in southwestern China as a regional Communist leader tried to prevent one of his subordinates from defecting to the U.S. consulate in Chengdu, in southwestern Sichuan Province.

Concerned that illegal activities, including the murder a British businessman, were about to be exposed by the defector and implicate the up and coming regional Party chief Bo Xilai, armored personnel carriers and other military forces were dispatched by Bo from his headquarters in nearby Chongqing to capture the defector, Wang Lijun. 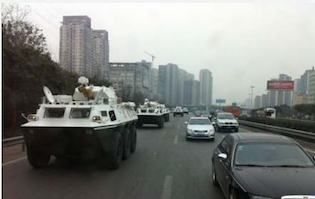 Within hours, China’s active yet heavily monitored Internet lit up with postings by Chinese "netizens," who posted information and photos that provided valuable early intelligence on what would eventually result in dramatic fall of Bo Xilai, who had been slated to serve on the Standing Committee of the Communist Party Politburo, the apex of power.

Bo represented an emerging neo-Maoist faction within the ruling Communist leadership whose influence is still uncertain despite Bo’s purge in 2012.

Photographs of military vehicles, both camouflaged PLA armored vehicles and internal security forces of the People’s Armed Police, including armored personnel carriers, were shown in a suburb of Chonqing headed to Chengdu. The forces were a sign that the regional Party chief was prepared to use force if necessary, and to violate a sovereign U.S. diplomatic outpost to capture the defector.

The Obama administration, fearful of upsetting China, eventually gave up Wang to Communist authorities, but not before a standoff took place outside the consulate between security forces loyal to Bo and those dispatched from Beijing.

The Beijing faction won and Wang was taken into custody and moved to the capital. Bo was later arrested and both he and Wang were tried and convicted on various criminal charges and imprisoned.

It was the most significant leadership split in China since Mao’s Cultural Revolution and many details about it first appeared online rather than in top-secret electronic spying or human agent reports.

The case highlights how the Chinese Internet, despite being censored and used as a tool for propaganda and deception, is weakening some of the habits of secrecy relied upon by the government in China.

"If you can read Chinese well and have the time to follow web sites in China regularly, there is a wealth of information about military exercises, military testing, and strategy," said former military intelligence officer Larry Wortzel.

For example, weeks before China officially revealed its new J-20 stealth fighter, Chinese websites revealed the rollout was coming, he said. Discussions among Chinese military officers on how to bolster forces are also available online.

Recent official announcements outlining new security measures, rules, and regulations regarding sensitive information, including Internet and cell phone usage are all indicators that Beijing is steadily losing strict control over many of its political, economic, and military secrets.

Those disclosures, some of them unprecedented, range from crimes by senior leaders and disputes among top Party officials, to the newest weapons systems, including new stealth aircraft, long-range missiles, and this year the construction of China’s first indigenous aircraft carrier.

For U.S. intelligence agencies, the Chinese Internet over the past several years has become an increasingly valuable source of information on China. And as the Bo Xilai incident shows, it can provide valuable early clues to what is taking place behind the scenes in China, a country regarded as among the most difficult "hard target" states.

A recent example was the online disclosure in western Xinjiang Province of unusual contrails photographed in the sky over Korla that were reportedly the aftermath of a Chinese ballistic missile defense interceptor test.

The Washington Free Beacon disclosed this week that the photographs were actually of an Oct. 30 test of one of China’s secret anti-satellite missiles.

Other weapons systems that first appeared online on Chinese websites either unofficially or with the backing of Chinese censors are:

A CIA spokeswoman had no comment on how the Chinese Internet is benefiting U.S. intelligence collection.

"The Chinese government will not just throw you in jail but will put a bullet in you if they think you’ve disclosed something they don’t want out," said Tkacik, a China affairs expert.

Usually, unofficial disclosures in China are designed to "reassure the Chinese people that China is a strong, technologically superior country and that they don’t have anything to fear from the Americans," he added.

Also, the Chinese are using disclosures, especially about weapons systems, as a means of psychological warfare, Tkacik said.

"There’s a certain amount of disinformation that’s designed to try and distract us from what [the Chinese] are really doing," he said.

One problem is that the Internet is increasingly becoming the only window for information on China, as Chinese counterintelligence has made gathering information from defense attaches or diplomatic personnel extremely difficult.

Internet disclosures can be valuable if the information that is disclosed can be verified by U.S. human or electronic spying, including communications intercepts or imagery satellites data, he said.

Rick Fisher, who specializes in studying the Chinese military, said the Internet can be a valuable if limited resource for studying China’s armed forces.

"I used to think that highlighting this [online] source would help convince their web censors to double down, but I assess that they are fully aware of this ‘danger,’" Fisher said.

"On the one hand they do crack down by enforcing greater coordination among web pages, censoring content all the time and occasionally making an example by arresting some guy for posting sensitive images or information," he said.

"But the Chinese Communist Party and the People's Liberation Army also recognize the value of sanctioning the use of their web to promote militarized nationalism by allowing their military fans to post tantalizing new details on occasion." 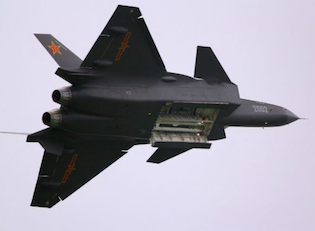 A significant example was the J-20 that received attention as part of a managed Chinese Internet propaganda exercise, Fisher said.

"Many researchers of the PLA are amazed by what can be found on the Chinese web, but it is also important to remember that some experience is needed in order to fully use this information," he said.

Technical journals also provide clues but many are strictly censored to avoid all mention of specific weapons programs being developed, he noted.

Other secret programs that have not been discussed online—other than in response to reports of the activities in the democratic states—include details of Chinese cyber warfare capabilities; the development of ultra-high speed hypersonic strike vehicles and anti-satellite weapons. These programs remain among China’s most tightly guarded secrets.

Internal leadership disputes among Communist Party officials also are among the most guarded secrets.

The Chinese boast of having the largest online population with more than 620 million Internet users, nearly half the population. A large percentage, by some estimates more than 75 percent, access the Internet through mobile devices.

More and more, studies show, Chinese Internet users are shunning traditional media, including all the state-run newspapers and news services and more than 14 official CCTV state television stations, in favor of online news.

Communist authorities have encouraged use of the Internet since the mid-1990s, mainly to support economic reform and national development.

But censorship remains tightly enforced, especially related to all topics concerning the ruling Communist Party. Any variance from official propaganda themes can mean dismissal from position or in some case imprisonment.

Online, the government blocks content it deems objectionable and has used the notorious "Great Firewall" to censor content.

But Chinese Internet users have become adept at circumventing Internet controls through a variety of means. One method has been to discuss sensitive topics by using key words that sound similar in Chinese but have different meaning.

Social media sites similar to Facebook include Renren and Kiaxin001.