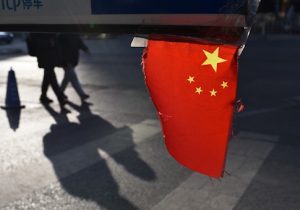 A recent Vox blog post by foreign editor Yochi Dreazen titled, "The big winner of the Trump-Kim summit? China" discloses at the bottom of the piece that the reporting was subsidized by the China-United States Exchange Foundation.

"This reporting was supported by the China-United States Exchange Foundation (CUSEF), a privately funded nonprofit organization based in Hong Kong that is dedicated to ‘facilitating open and constructive exchange among policy-makers, business leaders, academics, think-tanks, cultural figures, and educators from the United States and China,'" the post states in a note at the bottom.

CUSEF, as first noted by Washington Post columnist Josh Rogin, is a front organization backed by the Chinese government and established to spread the party's propaganda.

"You know CUSEF is chaired by a top official in the Chinese Communist Party's influence operations network, right?" Rogin queried Vox on Twitter.

"Tung Chee-hwa, CUSEF's chair, is vice chairman of the Chinese People's Political Consultative Conference, which is connected to the United Front Work Department, the Communist Party agency designed to advance party objectives with outside actors," Rogin went on to note.

Vox's ties to CUSEF are receiving increased scrutiny in light of efforts to lawmakers to counter China's promotion of propaganda in the U.S. media.

In the Senate's 2018 National Defense Authorization Act, a sprawling yearly funding bill, lawmakers specifically target "efforts by China to influence the media, cultural institutions, business, and academic and policy communities of the United States to be more favorable to its security and military strategy and objectives."

One senior GOP aide who worked on the China provisions in the NDAA told the Washington Free Beacon that lawmakers are facing an uphill battle in combatting Chinese propaganda given its increasing prevalence across a range of U.S. media outlets.

"The Chinese take a whole-of-government, and increasingly a whole-of society, approach to infiltrating and influencing America," the source said. "Congress is doing what we can but it's whack-a-mole and frankly we're way behind. It doesn't help when American news outlets take money from government-linked groups to produce stories about how super wily the Chinese government is."

CUSEF has also been scrutinized by Congress in recent months due to its alleged efforts to infiltrate the University of Texas in Austin.

Sen. Ted Cruz (R., Texas), in a January letter to the college, questioned the academic institutions efforts to partner with CUSEF.

"I am deeply concerned that collaborating with CUSEF, given its affiliations with the People's Republic of China (PRC) united front system and its registration as an agent of a foreign principal, would disseminate PRC propaganda within the Center and compromise its credibility," Cruz wrote.

"Operating as a pseudo-philanthropic foundation, CUSEF's ties to the Chinese Communist Part are an issue of grave concern," Cruz wrote.