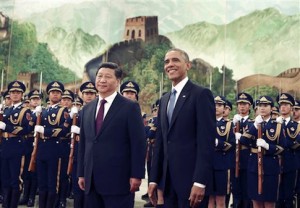 "We’ve seen very disturbing trends in space, particularly from nation states like China, as well as Russia, who have been public about their counterspace endeavors and ambitions," Adm. Cecil Haney, Stratcom commander said. Counterspace is the military term for space warfare capabilities and weapons.

"Fortunately this time it didn’t hit anything as it did in 2007, creating just thousands and thousands of pieces of debris which we’re still struggling with," Haney said, adding that the recent test indicated China’s intention to invest heavily in what he said is a "not very transparent" space arms program.

"Additionally, we see things that … have also been put in orbit that also is of concern, as well as things on land that are also being used to threaten our assets, such as lasers, such as jamming capability and what have you that threatens communications, GPS," the four-star admiral said.

China’s test of an antisatellite (ASAT) missile in July was disguised by the Chinese government as a ballistic missile defense test. In the past several years, China also conducted space tests using miniature satellites, some with retractable arms capable of grabbing or crushing satellites. Little is known of China’s ground-based laser and jamming ASAT capabilities.

The comments were the most explicit to date by a senior military officer expressing concerns about China’s buildup of space weapons that are designed to inflict damage on the U.S. military in a time of crisis or war.

China "likely calculates its growing space warfare capabilities will enhance its strategic deterrent as well as allow China to coerce the United States and other countries into not interfering with China militarily," the report said. "Based on the number and diversity of China’s existing and developmental counterspace capabilities, China probably will be able to hold at risk U.S. national security satellites in every orbital regime in the next five to ten years."

Mike Rogers (R. Ala.), the Strategic Forces subcommittee chairman, said the current world situation is extremely unsettled. "So, I do not believe the world can afford, nor can our own security allow, U.S. power to continue to recede," Rogers said.

"Chinese and Russian military leaders understand the unique advantages afforded by space systems and services and are developing capabilities to deny access in a conflict," Clapper said in a prepared statement to the Senate Armed Services Committee.

The Chinese military has written that its goal is to "interfere, damage, and destroy reconnaissance, navigation, and communications satellites," Clapper said, adding that Russia "has satellite jammers and is pursuing anti-satellite systems."

The threat posed by China’s space weapons could impact more than 60 nations operating satellites in space. "China needs to be more forthcoming about missile tests that appear to be more focused on the development of destructive space weapons," Haney said, noting China’s recent cyber attacks on computer networks.

Other troubling signs include China’s aggressiveness toward regional neighbors and developing space arms that indicate Beijing has "global aspirations" for its military forces.

"Low intensity coercion" by China is being used to advance its regional objectives in sovereignty disputes, he said.

"Combined with an overall lack of military transparency, its investment in capabilities such as counterspace technologies raises questions about China’s global aspirations," Haney said.

Under questioning from Rogers, Haney revealed that China, Russia and Pakistan are developing new nuclear weapons with advanced capabilities.

"We must be able to get better at space situational awareness," he said. "And these investments, including our ability to be more resilient in space, is what we aim to get to."

The budget request for fiscal 2016 includes an additional $5 billion for space defenses over five years.

Brian McKeon, principal deputy undersecretary of defense for policy who testified with Haney, said based on concerns about attacks in space, the Pentagon conducted an assessment of how to deal with space threats.

"The result was a significant adjustment in our fiscal year 2016 space portfolio," he said.

The increases will be used for space defenses, but do not appear to include U.S. plans to counter space weapons with U.S. space weaponry, reflecting the Obama administration’s arms control-centered approach to defense.