Beijing says vehicles were for civilian use, not covered by sanctions

Chinese military support to North Korea's missile programs included transfers of rocket transporters, according to a new report by a United Nations panel of experts.

"The trucks carried the ‘Sinotruk' logo on the fuel tank and shared some identical features with the Sinotruk Howo 6×6 series trucks shown at the 10 October 2015 military parade," the report said.

It is the second significant transfer of strategic missile technology from China identified by the panel.

In June 2013 the panel revealed the sale by China in 2011 of six to eight transporter erector launchers, known as TELs, that are now part of North Korea's first road-mobile intercontinental ballistic missile system, the KN-08.

China claimed the KN-08 TEL vehicles were sold as lumber haulers. However, analysts said the 16-wheel launchers are too wide for logging roads. The launchers are made by the Sanjiang Special Truck Co. of the China Aerospace Science and Industry Corporation (CASIC).

An earlier UN report in April said Chinese electronic components were found in debris of a North Korean missile test that landed in the Sea of Japan in 2016.

The latest disclosure on Chinese military assistance to North Korea comes amid reports the regime of Kim Jong Un is rapidly developing long-range nuclear missiles while stepping up threats to fire them at American cities and territory.

Rep. Robert Pittenger (R., N.C.) said the report on Chinese support shows that China has not been a good faith partner to the United States on North Korea.

"We must continue to pressure the Chinese, via any means necessary, to ensure they correct their actions related to North Korea, human rights, illegal maritime claims, and a variety of other related national security concerns," Pittenger said.

"This is really is no less an outrage than Nikita Khrushchev's supplying nuclear missiles to Fidel Castro's Cuba," he said. "Yet for over four years President Obama did not once publicly mention this Chinese outrage, and so far, neither has President Trump." 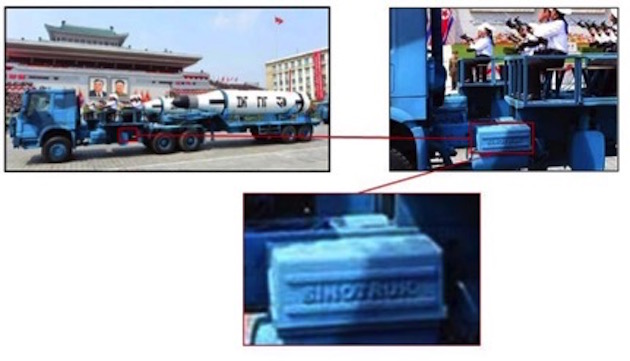 Other Chinese vehicles spotted with missiles in the April parade include what appeared to be a Sinotruk A7 tractor-trailer cab, seen carrying a new, unidentified North Korean medium-range missile. Mobile 300-millimeter precision-guided artillery rockets also were seen on the same Sinotruk vehicle as the KN-11. The artillery rockets were first paraded in 2015 and the Sinotruk carriers appeared upgraded in the April procession with a hardened grille.

The Chinese trucks were shown in videos and photos published by North Korean state media.

"Via Sinotruk, China is enabling North Korea to build larger tractor-trailer style TELs that in the future could perhaps transport multiple-warhead variants of its large, solid fuel ICBM," said Fisher.

"Mobility will be crucial to the missions of North Korea's new, large, solid-fuel ICBMs."

Neither Sinotruk nor CASIC were included in recent sanctions announced by the Treasury Department imposed on 10 Chinese and Russian companies involved in illicit North Korean trade.

The UN report outlined some of the advances made by the North Koreans, including the first flight tests in February and July of new long-range missiles and new rocket engines, as well as the flight test of a Scud variant with a maneuvering warhead.

Maneuvering warheads are more difficult to track and shoot down with anti-missile interceptors.

"These new systems will allow the country to achieve greater range, responsiveness, reliability, and penetrating capabilities," the report said.

The UN panel included a vague warning to China to stop its the missile-related transfers.

"The panel recalls and reaffirms its recommendation to member states on enhanced vigilance over the export of commercial vehicles that could be converted for military use," the report said.

The report says the Chinese stated in response to UN inquiries that the missile carriers appeared similar to those made by the China National Heavy Duty Truck Group Co. (CNHTC) Ltd., also known as Sinotruk, that were exported to North Korea between 2010 and 2014.

According to the report, the Chinese defended the transfers as not prohibited under the Security Council embargo.

"Furthermore, in the sales contract, CHNTC explicitly requested the buyer to ensure the civilian use of the trucks," the Chinese said.

China then claimed it could not confirm that the trucks seen in the parade, bearing the mark "Sinotruk" on the fuel tank, were produced by the Chinese companies because Beijing was not provided the vehicle identification numbers.

The report was published on Sept. 5, two days after Pyongyang detonated a large underground nuclear explosion. The report does not mention the nuclear test, North Korea's sixth test blast.

The Security Council on Saturday voted to impose additional sanctions on North Korea, including a ban on Pyongyang's largest export, coal.

North Korea "continued to violate sectoral sanctions through the export of almost all of the commodities prohibited in the [UN] resolutions, generating at least $270 million in revenue during the reporting period," the report said.

After China suspended coal import in February, North Korea "has been rerouting coal to other member states including Malaysia and Vietnam, and has shipped coal through third countries," the report said.

"Financial institutions in numerous member states wittingly and unwittingly have provided correspondent banking services to front companies and individuals of the Democratic People’s Republic of Korea engaged in prohibited activities," the report said.

China was not named as the member state guilty of facilitating banking services for the North Koreans.

The report notes that North Korea "has made significant technological progress" in advancing its weapons of mass of destruction despite sanctions.

"The country also continues to flout the arms embargo and robust financial and sectoral sanctions, showing that as the sanctions regime expands, so does the scope of evasion," the report said.

"For the first time in the history of the sanctions regime against the country, the use of a chemical warfare agent was reported by Malaysia, which accused [North Korea] of using VX [nerve agent] in the February 2017 assassination of Kim Jong Nam, reported to be Kim Jong Un's half-brother, in Kuala Lumpur."