China is building a long-range cruise missile fired from a shipping container that could turn Beijing's large fleet of freighters into potential warships and commercial ports into future missile bases.

The new missile is in flight testing and is a land-attack variant of an advanced anti-ship missile called the YJ-18C, according to American defense officials.

The missile will be deployed in launchers that appear from the outside to be standard international shipping containers used throughout the world for moving millions of tons of goods, often on the deck of large freighters.

The YJ-18C is China's version of the Club-K cruise missile built by Russia that also uses a launcher disguised as a shipping container. Israel also is working on a container-launched missile called the Lora.

Spokesmen for the Defense Intelligence Agency and Navy declined to comment.

Disclosure of the new missile comes as the Trump administration is nearing completion of a trade deal with China aimed at allaying American concerns over illicit trade practices by Beijing.

The YJ-18C container missile also is being developed as China is engaged in a major global program called the Belt and Road Initiative that will provide Chinese military forces and warships with expanded access through a network of commercial ports around the world.

China operates or is building deep water ports in several strategic locations, including Bahamas, Panama, and Jamaica that could be used covertly to deploy ships carrying the YJ-18C.

Other locations include Pakistan's Gwadar port near the Arabian Sea and in Djibouti on the Horn of Africa close to the strategic choke point of the Bab el Mandeb at the southern end of the Red Sea.

Rick Fisher, a China military affairs expert, said he is not surprised China is copying the Russian Club container-launched missile.

"It fits with China's penchant for seeking asymmetric advantages against its enemies," said Fisher, a senior fellow at the International Assessment and Strategy Center.

The new missile also supports China's longstanding development of deniable technologies such as a hard-to-track shipping container fitted with missiles.

The weapon system also could be sold to Iran or North Korea as China has done in the past with other weapons systems, including long-range missile launchers that were transferred to North Korea.

Fisher said China also showcased a precision-guided multiple launch rockets concealed in a shipping container-launcher, similar to the Club-K concept during a military show in 2016. 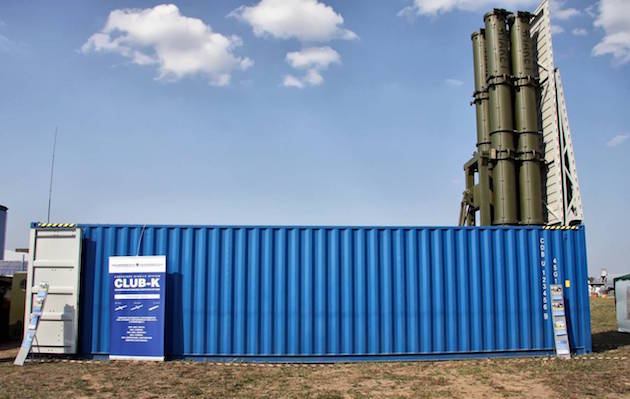 "Containerized missiles give China, Russia, and its rogue state partners new options for directly or indirectly for attacking the United States and its allies," Fisher said.

"Shipping container missile launchers can be smuggled through ports or via highway ports of entry and stored for years in a climate-controlled building within range of U.S. military bases, and taken out when needed for military operations," he added.

Container missiles also can be deployed on commercial ships that can sail off U.S. coasts or within American ports prior to a conflict.

"Potentially, Chinese missile launching containers could be stored near the Port of Seattle, waiting for the day they can launch an electromagnetic pulse (EMP) warhead-armed missiles over the Bangor nuclear ballistic missile submarine (SSBN) base," Fisher said.

"The EMP blast might take out electronics on the [submarines] and all over the base without having to launch a nuclear missile from China. Washington would be in chaos, would not know against whom to retaliate, and perhaps China uses American distraction to begin its real objective, the military conquest of Taiwan."

Retired Navy Capt. Jim Fanell, a former Pacific Fleet intelligence chief, said a containerized YJ-18 anti-ship cruise missile would add a significant threat to the Navy given the volume of Chinese container ships that enter U.S. ports on the west and east coast, well within range of the vast majority of the U.S. fleet.

"If this capability is confirmed, it will require a completely new screening regime for all PRC flagged commercial ships bound for U.S. ports," Fanell said.

Additionally the container-launched missiles could be targeted in foreign ports used by Chinese-flagged merchant vessels.

Retired Navy Capt. Chris Carlson who has written extensively on Chinese missiles, cautioned that the range of the YJ-18C is unlikely to be 1,000 miles.

"China has had considerable problems with propulsion of all kinds and the YJ-18 uses a reverse engineered Russian design turbofan in the subsonic cruise body," Carlson said.

The YJ-18 uses subsonic flight and then speeds up to supersonic flight shortly before striking a ship. It could not be learned if the YJ-18C is subsonic throughout its flight. One official called it a land-attack cruise missile.

However, based on the YJ-18 similarity to the Club missile, Carlson estimates four of the missiles could be deployed in one shipping container.

R. Evan Ellis, a research professor at the U.S. Army War College, says that China’s military activities in Latin America and the Caribbean are extensive.

During a conflict, "China’s substantial commercial base, its access to ports, and its military-to-military contacts in the Caribbean might prove useful," Ellis told Radio Free Asia. "All of these add up to growing Chinese influence in a region located close to the U.S. as well as its most important Atlantic coast military facilities."

Adm. Craig Faller, commander of the Southern Command, warned that China is expanding in the South American region.

"In the future, China could use its control of deep water ports in the Western Hemisphere to enhance its global operational posture," Faller said. "Particularly concerning is China's effort to exert control over key infrastructure associated with the Panama Canal."

China's port in Jamaica will serve as a transshipment hub for Chinese container ships arriving through the Panama Canal.

Panama shifted diplomatic recognition from Taiwan to China in 2017.

Chinese companies also are building the Panama Colon Container Port that will be a terminal for container ships.

Two-thirds of ships to or from the United States pass through the canal.

In Pakistan, the Gwadar port was built and is operated by China and is located strategically along oil shipping routes used by Chinese oil tankers.

China also is building a military base at Jiwani, a Pakistani port close to Iran.

Pakistan will play a key role in an economic corridor as part of the Belt and Road Initiative.

China also is investing in ports in Sri Lanka, Greece, Seychelles, and Australia that could be used for both commercial and military purposes.