The Chinese government recently unveiled a new legal tactic to promote Beijing's aggressive claim to own most of the strategic South China Sea.

The new narrative that critics are calling "lawfare," or legal warfare, involves a shift from China's so-called "9-Dash Line" ownership covering most of the sea.

The new lawfare narrative is called the "Four Sha"—Chinese for sand—and was revealed by Ma Xinmin, deputy director general in the Foreign Ministry's department of treaty and law, during a closed-door meeting with State Department officials last month.

China has claimed three of the island chains in the past and recently added a fourth zone in the northern part of the sea called the Pratas Islands near Hong Kong.

The other locations are the disputed Paracels in the northwestern part and the Spratlys in the southern sea. The fourth island group is located in the central zone and includes Macclesfield Bank, a series of underwater reefs and shoals. 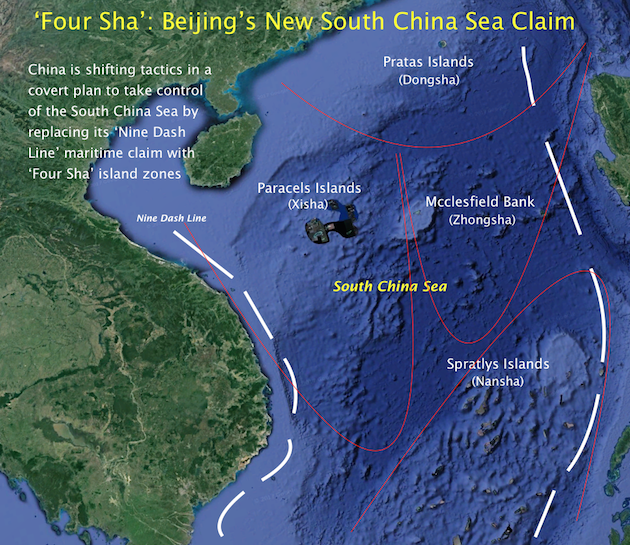 Ma, the Foreign Ministry official, announced during the meetings in Boston on Aug. 28 and 29 that China is asserting sovereignty over the Four Sha through several legal claims. He stated the area is China's historical territorial waters and also part of China's 200-mile Exclusive Economic Zone that defines adjacent zones as sovereign territory. Beijing also claims ownership by asserting the Four Sha are part of China's extended continental shelf.

U.S. officials attending the session expressed surprise at the new Chinese ploy to seek control over the sea as something not discussed before.

The United States, he said, has a longstanding global policy of not adopting positions on competing sovereignty claims over land features in the South China Sea.

"The United States does take principled positions, and has been clear and consistent, that maritime claims by all countries in the South China Sea and around the world must be made and pursued in accordance with the international law of the sea as reflected in the 1982 Law of the Sea Convention," Higgins said.

All the islands are claimed by other states in the region, including Vietnam and the Philippines, as well as by China.

The United States does not recognize China's control over the island groups and insists the sea, which sees an annual transit of an estimated $3.37 trillion in trade, is international.

The Pentagon and State Department have said the South China Sea is international waters and that American vessels and aircraft will transit the area unimpeded by Chinese claims of control.

The Trump administration's recent focus on pressuring North Korea to denuclearize has given China a green light to step up its South China Sea control efforts.

Chinese coast guard and navy vessels successfully blocked the Philippines from repairing a runway on one of the Spratly islands, and in July China pressured Vietnam into halting natural gas drilling in the Paracels.

The Chinese Four Sha legal maneuver follows the Permanent Court of Arbitration ruling in July 2016 that legally nullified China's claim to historically own all waters and territory within the Nine-Dash Line.

The international tribunal ruled in favor of the Philippines government, which disputed the Chinese claim to the Spratlys.

The tribunal noted "there was no evidence that China had historically exercised exclusive control over the waters or their resources," according to a statement by the court last year.

Michael Pillsbury, senior fellow at the Hudson Institute and director of the Center for Chinese Strategy, said the latest maritime maneuver by the Chinese is lawfare—one of China's three information warfare tools. The two others are media warfare and psychological warfare.

"The Chinese government seems to be better organized to design and implement clever legal tactics to defy international norms with impunity," Pillsbury said.

"It may ultimately require congressional legislation to mandate our executive branch to build a better capacity to counter the Chinese use of lawfare," he added. "If we had such a unit, it would be easy to counter China, especially when we have the United Nations on our side."

"Given that an announcement of claims to the entirety of the Nine-Dash Line raised alarms throughout the region, it makes sense for the PRC Foreign Ministry to float this notion of an incremental step forward with the concept of the Four Sha approach to the eventual restoration of the entirety of the South China Sea."

Fanell said the Trump administration should first remind Beijing and the rest of the world about the 2016 Permanent Court of Arbitration ruling that found China's sovereignty claims to the sea both illegal and illegitimate.

"Second, the U.S. would do well to permanently deploy a carrier or expeditionary strike group to the South China Sea in order to make sure Beijing knows that our words are backed up by more than mere words," he said.

The United States has been pushing back against China's maritime claims in the sea by conducting Navy warship freedom of navigation operations around the disputed islands.

The naval operations were stalled during the Obama administration in a bid to avoid upsetting China. Under President Trump and Defense Secretary Jim Mattis, warship freedom of navigation operations have resumed with regularity but without formal public acknowledgement of the operations.

In August, the destroyer USS John S. McCain sailed with 12 miles of Mischief Reef in the Spratlys, drawing criticism from China.

China denounced the warship passage as a provocation and violation of Chinese sovereignty.

China over the past several years has reclaimed some 3,200 acres of islands in the sea and in recent months began militarizing the islands with missile emplacements and other military facilities.

China also created a new governing unit over the sea called the Sansha administration in 2012. Sansha, or Three Sha, includes the Paracels, Macclesfield Bank, and the Spratlys and covered a total of 20 square kilometers of land, more than 2 million square kilometers of water, and a population of around 2,500 people.

A State Department notice at the end of what was billed as an annual U.S.-China Dialogue on the Law of the Sea and Polar Issues made no mention of the new Chinese lawfare tactic.

The statement said only that officials from foreign affairs and maritime agencies "exchanged views on a wide range of issues related to oceans, the law of the sea, and the polar regions."

The U.S. delegation was led by Evan Bloom, State Department director for ocean and polar affairs in the Bureau of Oceans and International Environmental and Scientific Affairs.