Analysis: In Yemen, the president would prefer not to

Late in the morning on October 12, 2000, in the Yemeni port of Aden, two al Qaeda operatives drove a small craft laden with explosives up to the side of the USS Cole and detonated their payload, killing themselves and 17 American sailors, many of whom were lined up for lunch in the ship’s galley. Sixteen years later to the day, another U.S. naval vessel conducting business in the neighborhood of Yemen was attacked, this time by Iranian-backed Houthi rebels using apparently sophisticated anti-ship cruise missiles.

The timing may or may not have been coincidental, as the unsuccessful missile attack followed another one earlier in the week in the same waters, on October 9. The Houthis missed that time, too, but they were more successful on October 1, when they all but sank the HSV-2 Swift, a former U.S. Navy vessel now operated by the United Arab Emirates. Rebels filmed the ensuing explosion and chaos. Watch the harrowing video, take in the size of the blast, and be grateful the attacks on American ships have thus far failed.

Early yesterday America responded. After receiving personal approval from President Obama, the Navy fired missiles of its own at radar sites on the rebel-held Yemeni coast—facilities said to be linked to the string of attacks. Even granting the possibility that there was some sort of legitimate operational reason for waiting so long to hit back, the appearance of delay conveys an unfortunate message: destroy the ship of a close American partner (the UAE has contributed troops to every major American-led military effort since the Persian Gulf War, save for Operation Iraqi Freedom) and pay no price; lob a couple of cruise missiles at American sailors, and skate; but do it twice—well, there Washington draws the line. 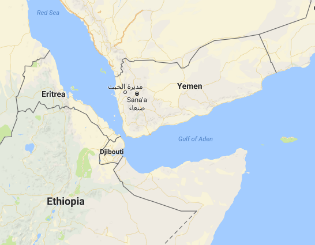 What are American ships doing near Yemen, anyway? The full story has a lot of ins, a lot of outs, but the simple version is that the Bab al-Mandab, the narrow passage between the Red Sea and the Gulf of Aden, is a critical route for global trade. It is thus unfortunate that the Yemeni side of the strait is engulfed in (at least) a three-way civil war between the Saudi-backed government, the Iran-backed rebel Houthis, and Sunni radicals of various affiliations, including both al Qaeda and ISIS. The United States, which has collaborated with the Yemeni government to fight terrorists for years, now provides weapons and support to the Saudi coalition fighting the rebels, and so in effect has taken a side in the war.

Not that it has done so with any particular enthusiasm. Never mind the fact that America has a demonstrable interest in preventing the southwest corner of the Arabian peninsula from falling completely under the banner of either an ally of revolutionary Iran or of Sunni terrorists—recall that al Qaeda’s local franchise was, for some years, the organization’s most dangerous, and that its members were behind unsuccessful attempts to down American airliners and the successful effort to slaughter the staff of Charlie Hebdo in Paris. In Yemen—as with so many other crises around the world that could have been forestalled by firm American action in their early days—President Obama, like Herman Melville’s Bartleby the Scrivener, would prefer not to.

The Houthi insurgency has been underway in some form or another since at least 2004, but the situation was manageable until last year when the Shia rebels seized a large amount of territory beyond their traditional neighborhood near the Saudi border, including Yemen’s capital, Sana’a. In the face of this assault, the Obama administration quite literally abandoned its ally, evacuating the U.S. embassy and the personnel of its extensive counterterrorism operation and losing millions of dollars of equipment that was seized by the Houthis. The whole thing was shameful—not to mention awkward, as only months earlier the president had cited, on national television, America’s light-footprint approach in Yemen as a success story, implicitly contrasting it with overreach in Iraq and Afghanistan.

It turns out that under-reach can be just as dangerous as overreach. Yemen is today in the grip of a brutal war that largely escapes global media attention, if only because an even more brutal civil war, itself also a consequence of American under-reach, is underway in Syria. The Saudi coalition we support in Yemen is guilty of the indiscriminate targeting of civilians—as are the Houthis, to be fair, though without American munitions they seem to be less lethal in practice—and some have speculated that attacks on the U.S. Navy this month have been a response to Saudi Arabia’s bombing of a funeral on October 8 that killed 140 people.

Maybe, maybe not—but what is undeniable is that the Obama administration’s efforts to avoid being dragged further into the fighting have ensured the conflict’s longevity and lethality, have contributed to the net level of chaos in the world, and have, in the end, failed to keep America clear anyway. In a kind of punchline to the whole mess, the New York Times report yesterday on the Navy’s retaliatory strikes included the gem that America’s support for Riyadh’s bombing campaign originally had to do with securing Saudi Arabia’s support for the Iran nuclear deal. As it seems unlikely that the apparently sophisticated missile systems used to destroy the Swift and attack the Navy’s ships could be employed by Houthi insurgents without some sort of support from Iran, this tidbit leaves one not knowing whether to laugh or cry.

What a tangled web we weave, when first we practice to get the hell out of the Middle East. There are many important differences between the Yemeni and Syrian civil wars, the rise of ISIS in Iraq, and, for that matter, the ongoing African civil war in South Sudan, but they have one important trait in common. A proactive, engaged American foreign policy that was comfortable with taking decisive action before affairs spun out of control would have saved lives in all of them. Barack Obama has generally preferred not to, and this has made the world a bloodier, more dangerous place.