America Has Fewest Cops in a Quarter Century, Data Find

There are now fewer police officers per person in the United States than at any point in the last 25 years, recently released federal data show, after over a decade of decline.

There were roughly 214 police officers per 100,000 Americans in 2019, according to the latest figures from the Census Bureau's Annual Survey of Public Employment and Payroll, which tracks employment across state and local governments. That represents a 1.5 percent decline from 2018 and a 9 percent drop from 2007, when police numbers last peaked.

Since that year, the number of sworn officers has declined precipitously, thanks in part to the Great Recession's effects on police budgets and in part to growing hostility to law enforcement in the years since mass protests in Ferguson, Mo. Recent events, including a wave of retirements and the cancellations of recruitment classes amid public outcry and COVID-driven budget crunches, suggest that the trend will persist through 2020.

That trend bodes ill for violent crime in America—which has plateaued in recent years—given the large body of evidence finding that cops have a substantial impact on crime rates. The continued erosion of America's police force, in other words, could mean a resurgence of the high crime rates that plagued the country throughout the 1980s and '90s—a deadly consequence of this creeping trend. 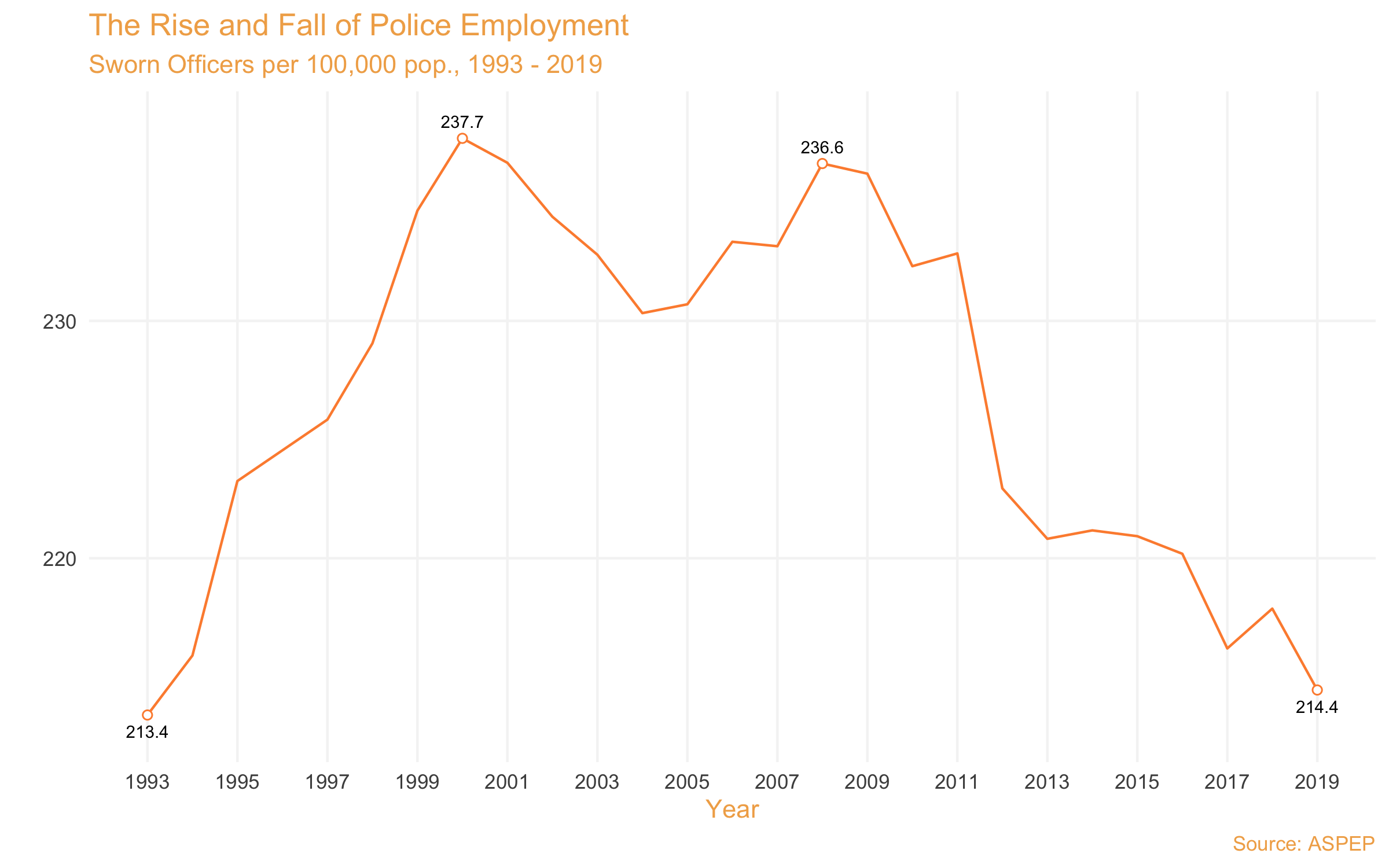 The number of sworn police officers rose steadily throughout the 1990s, in part due to expanded federal funding under the 1994 crime bill. That increase has been associated with significant reductions in crime and is considered to be a major driver of the "great crime decline" of the late '90s and early 2000s.

But, after remaining elevated throughout the middle of that decade, police employment rates began to crater amid the Great Recession, as state and local austerity kicked in. They took another nosedive beginning in 2016, the year after the first round of police protests drove public confidence in cops to its lowest level to date.

These two events have contributed to deeper demographic and labor market shifts, with many departments seeing a wave of retirements, according to a 2018 report from the Police Executive Research Forum, a nonpartisan organization of police chiefs. At the same time, the relatively meager wages of policing and increasing legal and social threats to the job are pushing away young people who might otherwise take up the badge.

"A lot of forces have converged over the last decade or so to make policing a much less attractive line of work," Rafael Mangual, deputy director of legal policy at the Manhattan Institute, told the Washington Free Beacon.

Mangual noted that in addition to low pay, police are seeing an uptick in violent deaths as well as an increase in "legal risk": "We've seen a new push for 'accountability' that often comes in the form of officers being laid off or prosecuted or sued, and a very robust public discussion of how to expand the scope of legal liability for police officers."

Those trends are likely to only grow more pronounced in the next several years. Nationwide protests against the police have prompted a wave of retirements among both chiefs and the rank and file, with NYPD retirements up 75 percent compared with 2019. A number of large cities across the country—including New York, Austin, Portland, Baltimore, and Washington, D.C.—have responded to these protests by slashing police budgets by up to a third, meaning fewer resources for hiring and training. 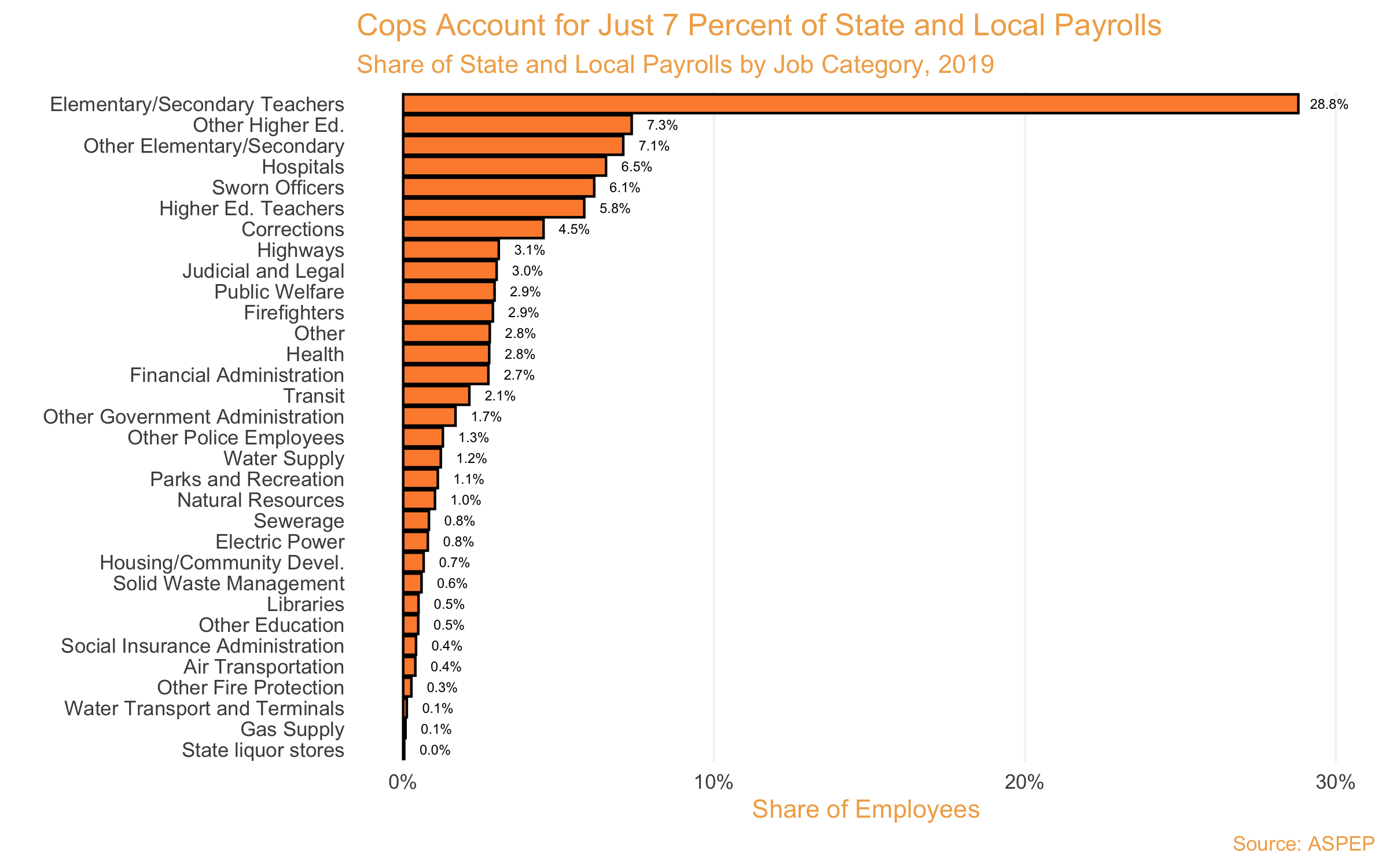 The public fixation on police has, in fact, come at a time of general belt-tightening, driven by the coronavirus. Census Bureau data show that police account for roughly 7 percent of all payroll spending, while national data suggest they consistently account for between 4 and 5 percent of all state and local spending. But while a small share of budget burden, major city police forces now are likely to face a disproportionate share of the coming austerity, as the political controversy around them benefits other public sector workers.

The major effect of that reduction, Mangual predicted, "is a reduced capacity to fight crime and keep violent crime at bay."

"If you limit police departments' ability to put cops on dots, as it were, that's going to translate to an increase in crime," he said.

Overwhelming empirical evidence supports the idea that cops have a deterrent effect on day-to-day crime and that therefore their reduced manpower could lead to a spike in crime. In New York, where Mayor Bill de Blasio has overseen the slashing of the force, shootings in the city have nearly doubled 2019 figures. That increase in shootings may be linked to the manpower demands of ongoing mass protests—a troubling sign for a world that will soon see fewer cops on the beat.