Mentions of the holiday have surged nearly 1,200 percent this year

Discussion on CNN and MSNBC of "Juneteenth," the June 19 commemoration of the effective end of slavery in the United States, has exploded nearly 1,200 percent in 2020 compared with previous years.

A Washington Free Beacon analysis found 365 mentions of the term on MSNBC and 243 on CNN from June 1 through June 19 of this year, according to a Kinetiq media search. Much of it concerned the outcry over President Donald Trump's decision to hold a political rally on the date in Tulsa, Okla., and his subsequent decision to delay it. He has since said he made the holiday "very famous."

Hosts on CNN and MSNBC condemned Trump for his ignorance about the date and his subsequent claim he made it famous. CNN's Brianna Keilar asked fellow anchor Don Lemon Thursday if Trump's lack of knowledge was an example of "systemic racism," and Lemon called the situation "laughable." MSNBC's Joy Reid laughed at Trump's declaration that he made the holiday famous, quipping Thursday, "You're welcome, black America."

There has, however, been a clear surge of interest in the holiday in 2020 compared with its mentions during June in previous years. On June 1 through June 30 of 2012 through 2019, the term "Juneteenth" or "June teenth" only appeared on MSNBC 30 times. On CNN, it was only mentioned 17 times during the time period, all in 2018 and 2019. The Free Beacon analysis did not include reruns. 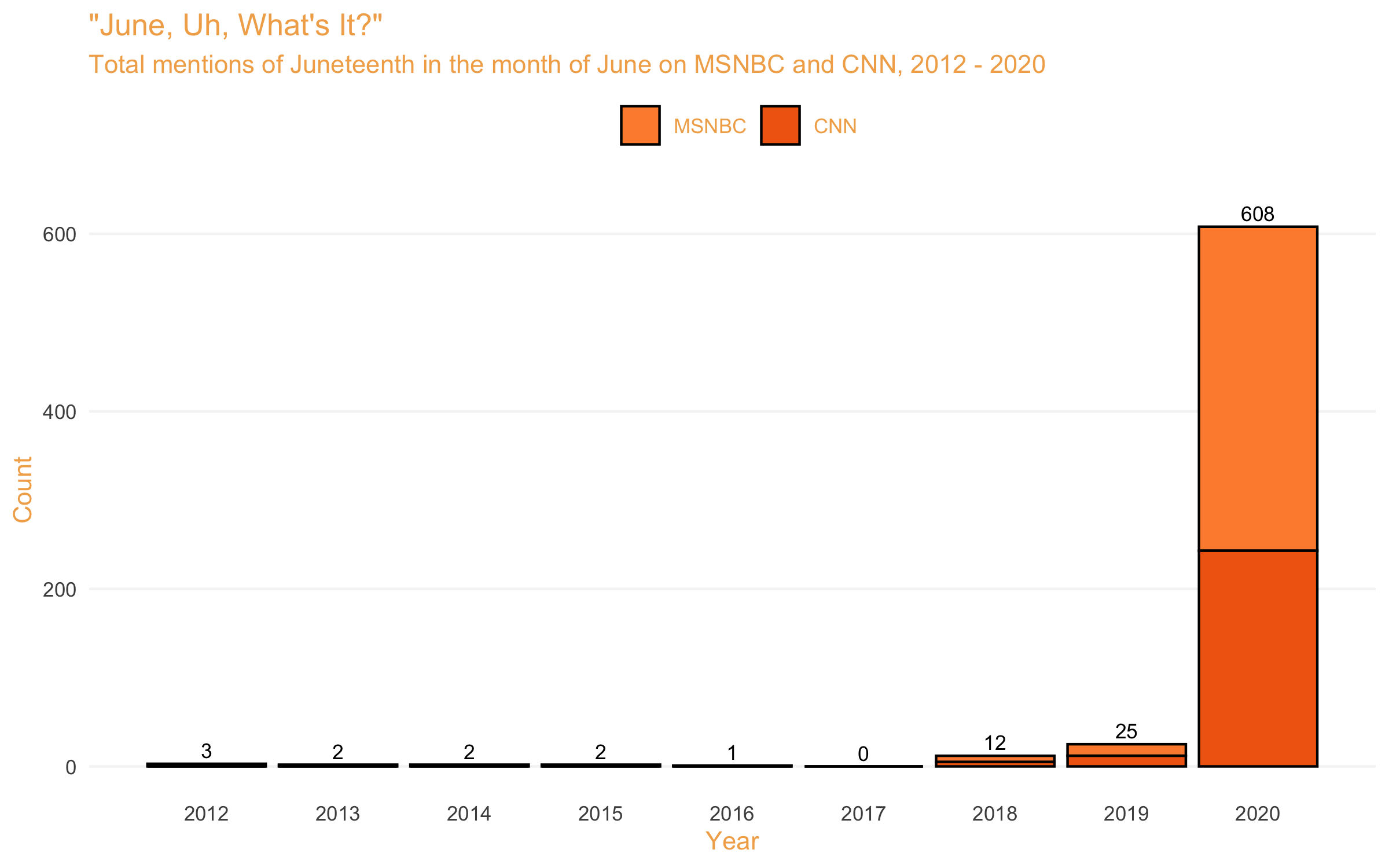 In 2015, the 150th anniversary of the holiday, only two mentions of it appeared that June on MSNBC, and one was during a speech by Hillary Clinton. The only MSNBC hosts who discussed the holiday on the air from 2012 to 2017 were Reid, Melissa Harris-Perry, and Al Sharpton, all of whom are black, while white hosts and reporters ignored it.

On June 17, 2018, MSNBC weekend host Alex Witt became the first white cable anchor to mention the holiday during the period examined by the Free Beacon. She admitted to Sharpton, who had discussed Juneteenth during a monologue on PoliticsNation, that she had never heard of it.

"I loved learning about the meaning of June, uh, what's it, 19th? Juneteenth! That is extraordinary," she said during a live toss between their programs. "I had no idea. It's something to celebrate across this land. It's an amazing date."

In 2017, neither network mentioned "Juneteenth" once. Fox News, however, interviewed Rep. Sheila Jackson Lee (D., Texas) on June 19, 2017, about her efforts to rededicate Houston's Emancipation Park for that year's Juneteenth celebration. Fox News has also seen a surge of "Juneteenth" discussion in 2020, going from 16 mentions of it from 2012 to 2019 to 93 in 2020.

Reid on Thursday acknowledged that the Juneteenth holiday has only become prominent across the country since the 2000s. Forty-seven U.S. states now recognize Juneteenth as a holiday, which honors the 1865 date when slaves in Confederate Texas learned of their liberation through the Emancipation Proclamation.

Juneteenth is often considered the date when slavery ended in the United States, but it was the 13th Amendment, ratified on Dec. 9, 1865, that officially abolished slavery nationwide.