A leading Minnesota environmental activist dismissed accusations that one of her top organizers sexually assaulted a minor, even as she admitted in private messages and legal proceedings that the organizer "probably did have sex" with a 15-year-old boy.

In a slew of newly revealed court filings, Honor the Earth cofounder Winona LaDuke—a political ally of top Minnesota Democrats such as Rep. Ilhan Omar and Attorney General Keith Ellison—acknowledged that the group's community organizer "probably" had sex with a Native American minor as a camp counselor. But LaDuke dismissed the incident, arguing that the organizer, Michael Dahl, engaged in a "consensual" relationship that she was "not to judge."

The revelation could undermine LaDuke's work opposing oil pipeline projects in the northern United States, an effort that has gained traction as President Joe Biden places progressive environmental policies at the center of his administration. Honor the Earth ran campaigns opposing the Dakota Access and Keystone XL pipelines, the latter of which Biden canceled via executive order in January. The group has since shifted its efforts to opposing the Line 3 pipeline, which is currently under construction in northern Minnesota. Omar recently met with Honor the Earth leaders to discuss the project and called on Biden to "stop Line 3" just days later.

LaDuke's attorney declined comment, saying his "focus for the next few days is Line 3 related goals." Honor the Earth did not return a request for comment.

A group of Native American women relayed "allegations of pedophilia" against Dahl to LaDuke directly in January 2015, according to a lawsuit filed four years later by a former Honor the Earth employee. Court documents show that LaDuke defended Dahl immediately following the accusation. In a February 2015 Facebook message, she wrote that Dahl "is two spirit and probably did have sex with this guy" but is not "a predator or pedophile as he's raised a lot of young men." LaDuke added that "there's a lot of trust of him by young men and all of us" and that she thought she had to "stand with mike." 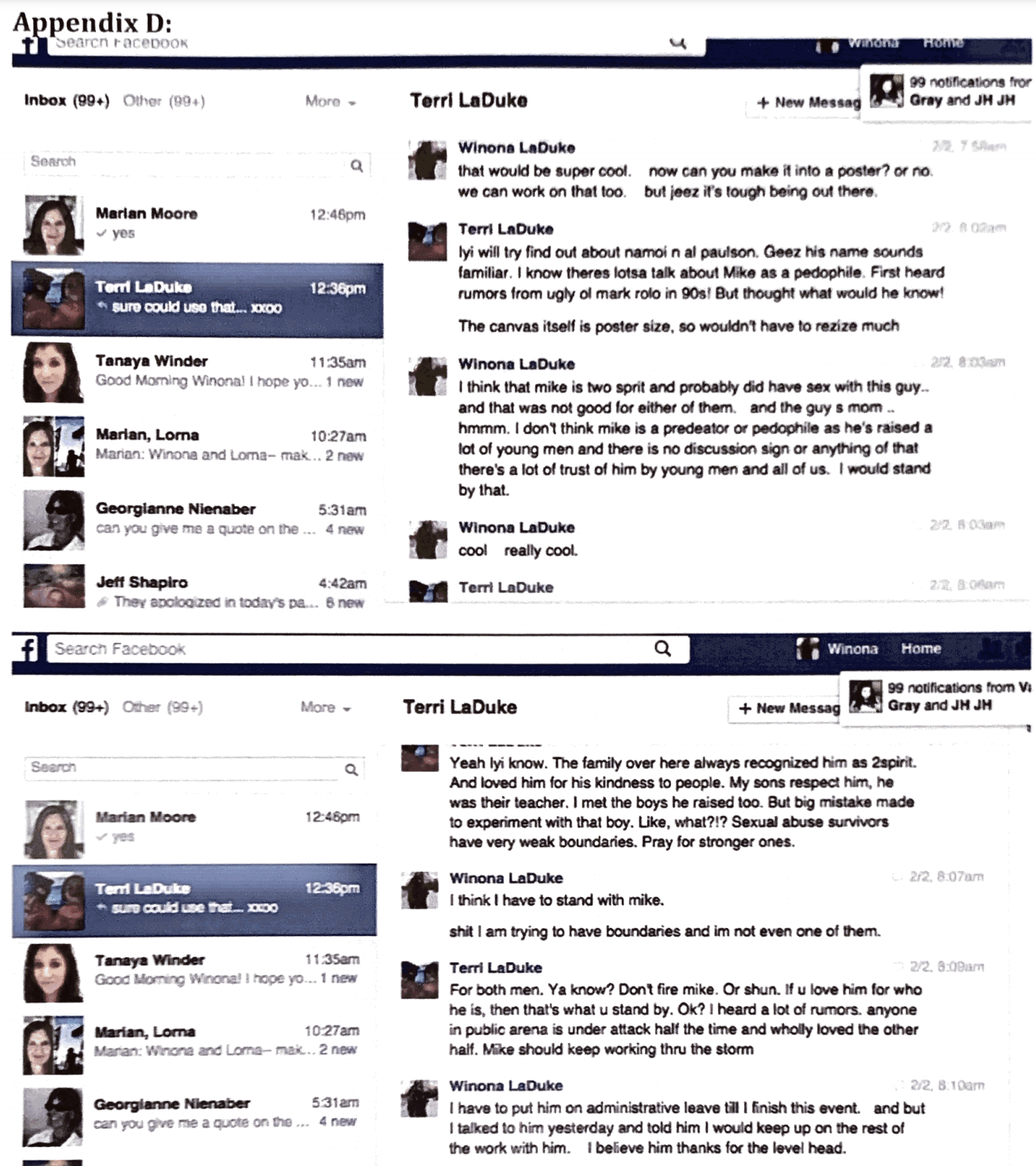 LaDuke echoed the sentiment years later in a July 2020 deposition stemming from the lawsuit. She stated that as a "camp counselor," Dahl "shared a lot of experiences" with a "younger guy," including one that "seems to have been" sexual. According to the environmentalist, however, the relationship was "actually consensual." LaDuke claimed that the alleged victim was "like 17 years old" at the time of the incident—old enough to meet Minnesota's legal age of consent—despite the victim's mother asserting that he was two years younger.

"And I'm not to judge, you know, these things," LaDuke said of the "consensual" relationship. She later said that she was "getting into this place where I don't really want to get people in trouble," asking "is this a closed deposition now or now it's a public record?"

Dahl's alleged pedophilia occurred in the 1990s, and he was not formally charged. When the accusations resurfaced at the January 2015 meeting between Honor the Earth and a group of Native American women, LaDuke noted that the "statute of limitations has passed on that," according to court filings. After the meeting, then-employee Margaret Campbell pressed LaDuke to fire Dahl. LaDuke refused and later placed Campbell on leave, prompting the 2019 lawsuit.

Honor the Earth's board of directors privately questioned LaDuke on Dahl's alleged behavior, as well as her decision to let Campbell go. Cofounder Amy Ray conceded that the situation "could be super damaging" to the group in an internal February 2015 email, asking that LaDuke take the allegations "seriously and … confront this head on." LaDuke responded by backing Dahl as a "very good person" and suggested that the matter be handled through "spiritual structures" as opposed to a full-fledged investigation.

Days later, LaDuke distanced the group from Dahl in a memo sent to Honor the Earth "community members, relatives, and friends," legal filings show. She noted that the group suspended Dahl's contract and pledged to affirm a "victim-centered approach." But LaDuke continued to associate with Dahl as Honor the Earth's executive director—she posted a photo of Dahl at an August 2015 "community event," prompting concern from one supporter who wrote that "many people feel uncomfortable" with his attendance "due to that personal matter." One year later, LaDuke asked Dahl to promote an Honor the Earth job posting. The activist also said in her deposition that she supported Dahl but that the group's board "was certainly not gonna let me keep working with" him.

LaDuke also faced pushback on Dahl from other prominent environmental groups, including Bill McKibben's 350.org. LaDuke emailed McKibben in April 2015 to discuss "problems with 350," disclosing that the group refused to work with Honor the Earth until she addressed the accusations against Dahl. LaDuke blamed the scandal on "a loose group of women" and claimed that she spent "at least 60 hours, of my precious time, digging" into the allegations, finding them "not to be true." She also lambasted McKibben for his "appalling" decision to "engage in policing the Native community," which LaDuke said was "a problem of white privilege and poor leadership."

LaDuke's personal investigation apparently satisfied McKibben—LaDuke is scheduled to appear at a Thursday 350.org "telepresser and virtual rally" opposing the Line 3 pipeline. 350.org did not return a request for comment.

LaDuke founded Honor the Earth in 1993 and gained prominence as Ralph Nader's running mate on the Green Party's presidential ticket three years later. Her environmental activism has helped her rub shoulders with both state and national progressives—in addition to her work with Omar, LaDuke partnered with Ellison in June 2020 to support a lawsuit against ExxonMobil. She also served as a Minnesota vice chair to Sen. Bernie Sanders's (I., Vt.) failed 2020 presidential campaign.

Omar, Ellison, and Sanders did not return requests for comment.