Black activists in Portland called out violent anti-fascist and anarchist rioters who they believe have hindered the social justice movement.

The presumed election of Democratic presidential nominee Joe Biden this month sparked yet another wave of riots in Portland. Unsatisfied with Biden's likely victory, far-leftist radicals vandalized the local Democratic Party headquarters and smashed windows of local businesses and a church downtown.

Now, numerous black community activists are speaking out against the violence, telling the Los Angeles Times they believe groups of mostly white anarchists have tried to infiltrate the racial justice movement.

"[The rioters] melded with Black Lives Matter, but they’re 90 percent white and don’t reach out to black organizations," Rachelle Dixon, vice chair of the Multnomah County Democrats, told the Times. "I didn’t destroy my own building."

Newly elected city councilman Mingus Mapps (D.) and Ron Herndon, who has advocated for racial justice in Portland for decades, both condemned leftist protesters who set fire to government buildings and other establishments this summer.

"When people set fire to a building, it really does not liberate me one bit," Mapps said. "It does the opposite. It fuels the political culture that makes racism possible."

Herndon added: "When I hear about somebody burning something down, I think about that as an act that’s always been used against black people. You are not helping us."

Rukaiyah Adams, chief investment officer of a foundation funding a multimillion-dollar racial justice initiative, said it was likely that white rioters were responsible for a recent attack on the home of city commissioner Dan Ryan.

Demonstrators took to the streets of Portland for over 100 consecutive nights this summer. Over that timeframe, they attacked a federal courthouse with explosives, set fire to a police union headquarters, and repeatedly looted local businesses and vandalized other buildings throughout the city. The Justice Department in September designated Portland an "anarchist jurisdiction" for the city's failure to curb the riots and support police. 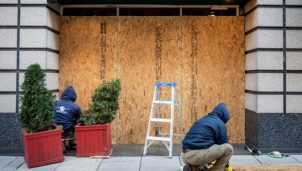