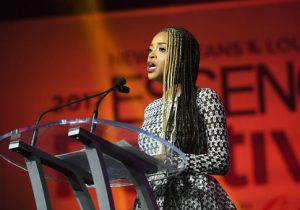 Women's March co-founder Tamika Mallory said during an event Friday that Israel committed a human rights crime in doing "whatever" it took to take land from Palestinians.

"This is not about stopping one side. This is about ensuring that the native people are able to enjoy the land. They shouldn’t have to ask anybody for their land. This is their land," Mallory said in remarks made via video at an event hosted by the Center for Constitutional Rights and the Justice Delegation, and flagged by The Forward.

Mallory, who joined the group of lawyers and civil rights activists on a trip to the Holy Land last month, accused Israel of obtaining the land by force.

"When you go to someone’s home and you need a place to stay, you ask ‘Can I come into your home and can I stay here, and can we peacefully coexist?’ You don’t walk into someone else’s home, needing a place. It’s clear you needed a place to go – cool, we got that! I hear that!" Mallory began.

"But you don’t show up to somebody’s home, needing a place to stay, and decide that you’re going to throw them out and hurt the people who are on that land. And to kill, steal, and do whatever it is you’re gonna do to take that land! That to me is unfair. It’s a human rights crime," she added.

Mallory went on to praise her Women’s March co-chair Linda Sarsour's activism for Palastinians, saying she had learned a lot from Sarsour.

Sarsour also spoke at the event and said apartheid is happening in "Palestine," funded by U.S. taxpayers' money.

"So don’t tell me about North Korea – because, guess what – I don’t fund North Korea’s human rights violations," Sarsour said.

Mallory has previously come under fire for attending anti-Semite Louis Farrakhan's annual Saviors' Day address, where he proclaimed, "When you want something in this world, the Jew holds the door."

Her attendance there prompted the Planned Parenthood chapter serving the Northwest United States and Hawaii to part ways with Mallory.