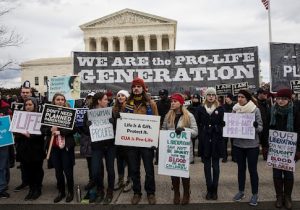 Pro-life demonstrators have been subjected to violence and vandalism at more than 50 college campuses since September.

Students for Life, the largest youth pro-life organization in the country, has tracked dozens of incidents on college campuses since the start of the 2018-2019 school year. Organizers have seen their displays stolen, destroyed, or vandalized, and some protesters have even been attacked for speaking out against abortion on campus. Students for Life President Kristan Hawkins said that "the pro-abortion fringe [is] turning to violence" at an alarming rate.

"Students speaking up for mothers and their pre-born infants face real opposition to the simple truth that we want to love them both," she said in a statement. "I'm proud of the commitment of our student leaders who take time away from their studies and all the activities available to them on high school, college and university campuses to speak for the least of these."

The group has launched a new website documenting the vandalism incidents from 2012 to 2019 in order to draw attention to the state of free speech on campus. More than 50 displays or protests have been vandalized during the current school year, according to a release. Students for Life also published a Facebook video showing students and faculty members stealing crosses from displays, erasing chalk messages, and threatening protesters.

Terry Schilling, executive director of the American Principles Project, said that intimidation tactics have long been employed on college campuses. Those measures can backfire in the face of resistance. He said the lengths that abortion supporters go to silence peaceful pro-life demonstrations reflect "how powerful the pro-life argument is."

"History shows that movements which are built on destroying the dignity of the human person—movements which rely on violence and intimidation—rarely last long," Schilling said. "Therefore, we can be confident that the days of abortionists profiting off of poor, scared, and young women are almost over."

Free speech rights on campus have come under increasing scrutiny in recent years, as conservative speakers and academics have been subjected to violent protests or blocked from holding events altogether. In March, President Trump signed an executive order directing agencies to review how universities handle free speech. The new policy will take steps to "ensure institutions that receive federal research or educational grants promote free inquiry."

While defunding research initiatives over campus speech codes seems a remote possibility, Students for Life said that it sends the right message to administrators. Hawkins said that student activists will turn out to demonstrate against abortion no matter the hurdles that opponents and campus administrators put in their way. The group says that its own experience demonstrates the need for President Trump's executive order.

"We won't be silenced," Hawkins said. "For a picture worth a thousand words illustrating the need for President Trump's executive order protecting student free speech, look no further."

Schilling said the defiance of young activists in the face of opposition should inspire confidence.

"Pro-lifers must keep up the fight and refuse to be silenced and intimidated," he said. "Pro-lifers are gaining strength, and young people are leading the way."