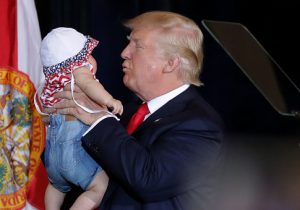 The Trump Administration filed a new regulation Friday that aims to create a "bright line" between abortion clinics and taxpayers' money.

The new rule, if approved by the Office of Management and Budget, will regulate recipients of federal funds under Title X, requiring them to physically and financially separate themselves from any organization that provides or supports abortion.

Critically, the statute explicitly prohibits any federal funding for "programs where abortion is a method of family planning." But that prohibition has historically been stretched, often to the point of unrecognizability. According to the Weekly Standard, Title X recipients have co-located with abortion clinics, referred patients for abortions, and lobbied in favor of abortions.

President Ronald Reagan's administration issued a series of regulations in 1988 in an attempt to block these practices. Although upheld by the Supreme Court as constitutional, they were never enforced. The Reagan rules are the template on which the Trump plan was designed.

The Trump Administration's proposal breaks from the Reagan-era version in one important way. Specifically, it does not prohibit Title X funding recipients from counseling their patients to seek an abortion, a practice proposed under the Reagan plan and commonly referred to as a "gag rule."

The lack of a gag rule in the new regulation did not stop pro-abortion groups claiming there was one. This deception extended to politicians such as Sen. Elizabeth Warren (D., Mass.), who took to Twitter to disclaim the imagined transgression.

"Today, @realdonaldtrump will issue a ‘gag' rule that will stop Title X doctors from even talking to their patients about abortion-related services," Warren wrote.

Warren and others' attacks on the new rule may be due in part to their indebtedness to abortion clinic/advocacy group Planned Parenthood, which claims to make up about 13 percent of Title X clinics, and which received more than $550 million in federal funding in 2015-2016.

The organization's PAC, Planned Parenthood Action, was quick to slam the Title X revision, repeating the false gag rule claim spread by Warren and others.

".@realDonaldTrump has said from day one he wants to control women. He & @SecAzar are making it official government policy by blocking patients from care at Planned Parenthood, allowing doctors to withhold abortion info from patients, & putting women's health at risk. #NoGagRule," it tweeted.

Planned Parenthood receives between $50 and $60 million in Title X funding, according to the Washington Post. It may lose all of this funding if it is unwilling to adhere to the administration's "bright line of separation," fulfilling a long-standing commitment by Trump and national Republicans to defund the clinic chain.

While those whose livelihood depends on easy access to abortion and campaign funds from abortion providers booed the new rule, pro-life advocates were quick to cheer the Trump Administration.

"As the former director of a Planned Parenthood in Texas, I used to be on the reciprocal end of the pro-life movement's desire to defund the abortion giant," said Abby Johnson, president of a group that helps abortion clinic workers leave the industry. "There was never any separation of funds in our clinics—it all went to the same account, whether that money came from taxpayers through Title X or from supporter donations or from payments for abortions."

"Abortion is not healthcare and women deserve better than their government forking over hundreds of millions of dollars to an enormous organization that seeks to strip women of their femininity by telling them abortion is equal to empowerment. That was only one of many lies I told the women I counseled when I worked at Planned Parenthood," Johnson added.