Speakers six times more likely to be liberal than conservative

The survey also found that no conservatives currently in office were invited to give a commencement speech this year. However, Democratic office holders such as Vice President Joe Biden, Gov. Terry McAuliffe, Sen. Michael Bennet (Colo.), Congressman John Lewis (Ga.), and Los Angeles Mayor Eric Garcetti have all been invited to speak at graduations. The trend extends to members of the Obama administration and their predecessors in the Bush administration. 14 Bush officials were invited to give commencement speeches during the eight years they were in office whereas nine Obama officials have been invited in this year alone.

YAF said this year's survey reflects a continuing trend in higher education. Last year liberal speakers outnumber conservative ones by 5 to 1. It was 4 to 1 in 2013 and 7 to 1 in 2012. 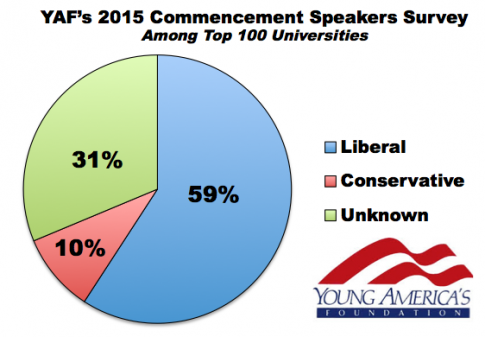