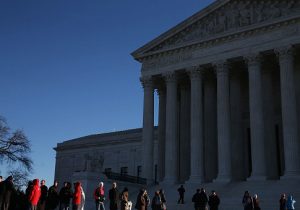 Colorado regulators violated the freedom of religion when they sanctioned a Christian baker who declined to participate in a gay wedding, according to a landmark Supreme Court ruling.

The justices ruled 7-2 in Masterpiece Cakeshops, Ltd. v. Colorado Civil Rights Commission that state authorities unconstitutionally punished the Christian owners of the bakery for declining to participate in a gay marriage ceremony. The Court ruled that the bakers were protected by the Free Exercise Clause of the First Amendment and that the discrimination rules were not viewpoint neutral for religious believers.

The dispute began when a gay couple approached a Christian baker in 2012 asking for a cake to celebrate their wedding. The baker declined to make a custom cake for the event, citing his religious beliefs, but told the couple they could purchase other goods in the store.

Masterpiece Cakeshop has been one of the most contentious cases in the wake of the Supreme Court's 5-4 Obergefell ruling in 2015, which overturned all state laws defining marriage as between only a man and woman. Justice Anthony Kennedy authored the majority opinions in both cases. The Court found that Colorado's Civil Rights Commission, which enforces discrimination policy, operated in a manner at odds with religious tolerance. Its staff demonstrated a "clear and impermissible hostility toward the sincere religious" and did not make efforts to accommodate the religious freedom of the business owners. Instead the commission compared traditional beliefs about marriage to slavery and the Holocaust.

"Some of the commissioners at the Commission's formal, public hearings endorsed the view that religious beliefs cannot legitimately be carried into the public sphere or commercial domain, disparaged Phillips' faith as despicable and characterized it as merely rhetorical, and compared his invocation of his sincerely held religious beliefs to defenses of slavery and the Holocaust," the ruling says.

The commission defended the imposition of massive fines on the bakery saying that it had to safeguard gay residents from hostile and discriminatory forces by those who continue to oppose gay marriage. Justice Ruth Bader Ginsburg dissented from the majority, contrasting Masterpiece Cakeshops from other Christian bakeries that appeared before the commission. She also dismissed the idea that the commission's handling of the case was hostile to religion.

"What matters is that Phillips would not provide a good or service to a same-sex couple that he would provide to a heterosexual couple," Ginsburg said. "What prejudice infected the determinations of the adjudicators in the case before and after the Commission? The Court does not say."

The bakery defended itself by pointing out that it continued to serve gay customers and objected only to participating in matrimonial services. The justices ruled that the commission should have weighed this evidence before punishing Masterpiece Cakeshop.

"The Commission's treatment of Phillips' case violated the State's duty under the First Amendment not to base laws or regulations on hostility to a religion or religious viewpoint," the majority says.

Justice Clarence Thomas wrote a concurring opinion in the case. He noted that the majority opinion promised that "religious liberty lives to fight another day," but added that he expects future conflict to continue based in part on Justice Kennedy's reasoning in Obergefell, which attributed laws banning gay marriage primarily to hostility toward sexual minorities. He said the Court must embrace a more expansive defense of free speech, as well as religious liberty, in light of the growing movement to sanction speech that offends the sensibilities of others.