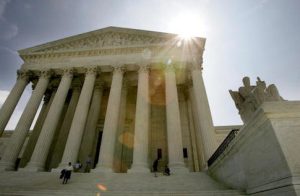 An Arkansas law that requires abortionists to have hospital admissions privileges will move forward after the Supreme Court declined to take up the case.

On Tuesday, the Supreme Court declined to hear Planned Parenthood of Arkansas & Eastern Oklahoma v. Jegley, a case seeking to block health regulations on abortion clinics. The Arkansas law requires medical abortion providers to have hospital admitting agreements in order to operate, a regulation that Planned Parenthood claimed would shutter two of its three clinics. The 8th Circuit Court of Appeals reversed a lower court ruling that would have prevented the law from going into effect because the district court judge "abused its discretion" in granting the preliminary injunction.

"We are left with no concrete district court findings estimating the number of women who would be unduly burdened by the contract-physician requirement," the appeals court said in its decision. "Because the district court failed to make factual findings estimating the number of women burdened by the statute, we vacate the preliminary injunction and remand for further proceedings."

Abortion supporters argued that the Court should make the same judgment in the Arkansas case. They asked the court in a brief to grant an injunction because "allowing these laws to take effect makes it more difficult to obtain abortions."

"Arkansas is now shamefully responsible for being the first state to ban medication abortion," said Dawn Laguens, executive vice president of the Planned Parenthood Federation of America. "This dangerous law also immediately ends access to safe, legal abortion at all but one health center in the state. If that’s not an undue burden, what is? This law cannot and must not stand. We will not stop fighting for every person’s right to access safe, legal abortion."

The Arkansas attorney general's office waived its right to respond to the suit.

This is not the first time the Supreme Court has been asked to review hospital admissions legislation. A similar Texas law was struck down in 2016 by a 5-3 ruling in part because many abortion clinics closed in the state in the wake of the law's passage. Justice Anthony Kennedy joined four Democratic appointees in ruling the Texas regulations made it harder to terminate a child in utero.

"Each places a substantial obstacle in the path of women seeking a previability abortion, each constitutes an undue burden on abortion access, and each violates the Federal Constitution," Justice Stephen Breyer wrote for the majority in Whole Woman's Health v. Hellerstadt.

Pro-life activists praised the court for refusing to intervene in the case and allow it to play out in the lower courts. Jeanne Mancini, president of the March for Life, said Planned Parenthood's attempt to minimize health oversight demonstrated that it values cheap operations over the lives of patients.

"Planned Parenthood's efforts to remove even the most minimal protections for women and babies continue to reveal the fact that their top priority is profit, not healthcare," she said in an email. "We are grateful to see the Supreme Court refuse to engage this case which would weaken health regulations for women seeking chemical abortion."

The decision does not necessarily mean the law will avoid future legal conflict as the case centered on the preliminary injunction, and leaves open the possibility that a judge could strike it down on its own merits. The case will return to the district court level in order to determine how many women would be affected by the regulations.

Update 2:35 p.m.: This post has been updated to reflect Planned Parenthood's response to the Supreme Court decision.