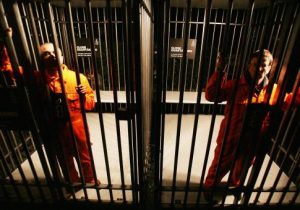 A criminal going to prison substantially cuts the chances his peers and younger brothers will be jailed in the following four years, a new paper finds.

More specifically, a person's prison stay cuts his criminal peers' chances of being charged with a crime by 51 percentage points, and his younger brothers' chances by 32 percentage points. That effect persists over the four years following sentencing, with the size of the reduction actually growing over time.

This "network analysis" allows us to think about the impact of incarceration in terms broader than just how prison impacts the individual. Does putting someone away make other criminals who are connected to them more or less likely to offend? What about the people to whom they are related? The answer to both, the new paper finds, is an emphatic "less."

This finding is based on an analysis of government data on offenders in Norway, combining information about criminals and their peer groups. The paper takes advantage of the fact that Norwegian law requires a "principle of randomization" in assigning cases to judges — offenders are randomly paired with judges, allowing the study's authors to remove many of the possible confounding variables to create a pseudo-experiment.

Using this approach, the study's authors considered the criminal- and family-network impacts of incarcerating a person. Data on co-offenders allowed them to define a person's criminal network out to three degrees (co-offenders, co-offenders of co-offenders, etc.) — the reduction in offending rates showed up throughout. Notably, the family-network impact is actually limited to brothers, and only younger brothers at that. Sisters, children, and spouses all show no significant effect.

There are two factors that make a big difference in explaining the effect on co-offenders, namely proximity in time and space. The offense reduction stops being significant for co-offenders whose offenses don't happen close to, or at a time similar to, the original offender.

The big question, of course, is why all this happens: Why does putting one person away make others less likely to commit crimes? Criminological theory gives us a couple of answers.

One explanation is simply that putting a person behind bars makes him less likely to commit crimes, or to induce his peers to: this is called incapacitation. However, the study's authors note, people are usually in jail for far less time than the effect lasts. They find that the average length of a Norwegian prison sentence is 4.8 months, and 90 percent of sentences are under one year. Yet the reduction persists—in fact, strengthens—for years two through four, suggesting that sending one person to prison lowers offending even after he gets out.

Another explanation might be prison's "rehabilitative" effects. Norwegian prisons are far cushier than their American or even continental counterparts, and the experience of time in prison may be making an offender a better community member after release. Norway has a strikingly low recidivism rate, and the experience of Norwegian prison's rehabilitative programs may make offenders less likely to induce their peers to offend.

On the other hand, there may also be a network-wide "deterrent" effect. Seeing one's peer or brother go to jail may induce people to "go straight," or may reduce their trust in that person to induce them to engage in crime, constraining the proverbial bad apple that would otherwise spoil the bunch.

To the extent that the rehabilitative explanation is accurate—and the study's authors lean on it multiple times when they explore underlying causes—it is hard to know if these effects would port to less permissive prison systems with higher recidivism rates, such as the United States'. However, if deterrence has more explanatory power, then the impact of incarcerating an individual on his community may need to be reconsidered, with an eye toward a more expansive understanding of how incarcerating people makes their fellow countrymen safer.