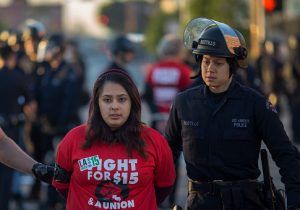 A $15 per hour minimum wage would lead to $2.4 billion in property crimes, a new paper released Monday argues.

The paper directly contradicts past arguments, most prominently from the Obama-era Council of Economic Advisers, that raising the minimum wage would reduce crime rates. Rather, the authors find, an increase to the minimum wage drives up property crime rates among 16-to-24-year-olds, the group most likely to be working for minimum wage already.

Myriad factors determine whether or not people choose to commit crimes, including economic ones. Access to jobs, steady income, and education, can all influence whether or not a person begins a career as a criminal. This has a practical implication for policymakers looking to reduce crime: In addition to expensive interventions like increasing incarceration or the number of cops, enhancing labor market access and outcomes might be an effective approach.

This insight is the basis for an argument put forward by the Council of Economic Advisers under then-President Barack Obama in 2016. As part of a broader overview of economics and the criminal justice system, the CEA conducted a "back-of-the-envelope" analysis and concluded that raising the minimum wage to $12 by 2020 would cut the crime rate by 3 to 5 percent—equivalent to 250,000 to 510,000 crimes.

However, there is a problem with this approach. Although the minimum wage increases take-home wages for some workers, it also leads to reduced hours and job loss among workers. This is especially true for those whose skill level who puts the market value of their labor below the floor imposed by the minimum wage—a situation which increasingly encourages the replacement of people with robots.

These effects, especially when they fall on otherwise low-skill Americans, may actually lead to a net increase in the amount of crime following a minimum wage hike. This could be because a lost job or hours could lead to petty larceny to get by; because the emotional impact of losing a job could be expressed in criminal behavior; or because of lost human-capital benefits thanks to a hike's effect on school enrollment and on-the-job training.

The new paper, "Do Minimum Wage Increases Reduce Crime?" attempts to quantify the reality of the CEA's claim, and whether or not it is drowned out by adverse effects. The results are not heartening for minimum-wage advocates.

"We find little evidence that minimum wage increases affect violent or drug crimes, or net crime among older individuals, but do increase delinquency-related crimes related to teenage idleness," the authors write. "We conclude that increasing the minimum wage will at best be ineffective at deterring crime and at worst will have unintended consequences that increase property crime among young adults."

To reach these conclusions, the paper's authors rely on county-level arrest records from the FBI's Uniform Crime Reporting system. To these records, they add information on minimum wage increases between 1998 and 2016 by county, state, and federal law, in order to exploit the way that the minimum wage has changed in different places at different times.

Using these figures and standard statistical methods, the authors estimate the effect of the minimum wage level on the crime rates of 16-to-24 year-olds in each county and year, the group on which changes in the minimum wage has the most impact, and who are most crime-prone. They also compare their results for that age-group against those over 25.

The results of their analysis with the UCR indicate that there is a statistically significant effect of a higher minimum wage on increasing property crime arrests, but neither drug nor violent crime arrests. These effects are consistently significant among 16-to-24-year-olds, not among those 25 and over. They are most significant in urban counties (those with 100,000+ population), and do not vary significantly across races.

Importantly, most of the crime increase among 16-to-24-year-olds is driven by an increase in petty larceny; the authors find no evidence that minimum wage hikes affect other types of property crimes or any violent crimes.

In addition to the UCR, the study uses survey data from the National Longitudinal Survey of Youth, which tracks the wage levels and criminal behavior of a cohort of respondents surveyed regularly from their adolescence in 1997. Using these data, the authors also identify an increased likelihood of engaging in property crimes among 16-to-24-year-olds affected by the minimum wage. Similar, smaller effects for minimum-wage-exposed people over 25 further reject the CEA's claim that a minimum wage hike will cut crime.

Rather, the authors suggest, pushing up the minimum wage encourages the young people most likely to be affected by the hike—through fewer hours and less employment—to opt to engage in petty larceny.

"Together, the findings from this study suggest that, in contrast to the CEA claim, higher minimum wages are unlikely to be an effective tool to fight net crime," they conclude.