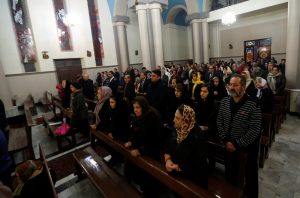 A court recently upheld the convictions sending the four men to prison for longer than was expected, and they could receive a call within the next day to report at the prison gate in their home city of Rasht, according to World Watch Monitor.

Among the group is Youcef Nadarkhani, a pastor who has been arrested several times by the Iranian government. In 2010 he was sentenced to death on charges of apostasy. He was acquitted two years later but arrested again and detained briefly in 2013.

Nadarkhani and fellow church members – Mohammad Reza Omidi, Mohammad Ali Mosibzadeh, and Zaman Fadaei – were arrested in 2016 " while performing Christian rituals at the house of a friend."

The most recent annual report of the United States Commission on International Religious Freedom (USCIRF) lists Iran as a "country of particular concern" for engaging in "particularly severe religious freedom violations." The report estimates there are approximately 300,000 Christians in Iran. Christians suffer various forms of persecution, including surveillance, restrictions on church construction, and arrests.

The USCIRF’s assessment is echoed by the State Department’s 2017 Annual Report on International Religious Freedom, which states Christians in Iran have "continued to experience disproportionate levels of arrests and detention" over the past year. United States Ambassador-at-Large for International Religious Freedom Sam Brownback spoke upon the release of the annual report last week, and he referred to reports of religious freedom violations in Iran as "horrific."

President Trump’s administration has made it clear that promoting international religious freedom is a top priority. Secretary of State Mike Pompeo has said the United States "will not stand by as a spectator" in the face of religious freedom abuses around the world. Pompeo will host a meeting of foreign ministers this summer that he said will identify "concrete ways to push back against persecution and ensure greater respect for religious freedom for all."