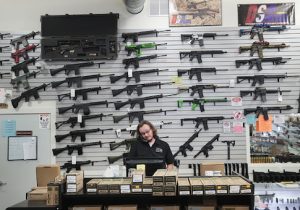 A pair of Republican senators introduced a bill on Friday that they say will prevent large financial institutions from denying service to gun and ammunition makers and dealers.

Sens. Kevin Cramer (R., N.D.) and John Kennedy (R., La.) introduced S821, the Freedom Financing Act, in an effort to keep banks with more than $10 billion in assets from denying services to members of the gun industry. The Republicans said the bill was designed to prevent major financial institutions from effectively crippling legal gun transactions they don’t like. They said the banking industry should not be able to decide whether Americans can lawfully purchase legal gun products.

"It's not a bank's job to create policy," Kennedy said in a statement. "They need to leave the policymaking to Congress. Banks should not be able to discriminate against lawful customers on the basis of social policy."

"A small number of banks controlling most of the financial sector could effectively illegalize legal commerce by refusing to finance certain industries or process certain transactions," Cramer said. "Look no further than pro-Second Amendment industries where such discrimination has already occurred. Big banks should not be the arbiters of constitutionality."

The legislation comes after a series of moves by the country's biggest banks to try and restrict what firearms are made by gun companies as well as to whom they’re sold. Bank of America announced in 2018 it would no longer work with companies that produce "military-style firearms." JP Morgan Chase also said it would limit its business with gun companies in 2018. Citibank went further and said it wouldn't work with any company that sells so-called high capacity magazines or sells firearms to adults between the age of 18 and 21.

Wells Fargo has faced pressure from gun-control activists to adopt similar policies but has bucked the trend and decided to continue to do business with gun companies.

"The banks should keep in mind that these lawful customers are the same hard-working taxpayers who bailed them out during the recession," Kennedy said. "This legislation will ban big banks from refusing to do business with customers that may not share the same political values as the bank. This kind of power move is an unfair assertion of dominance by the big banks, which is why it should be illegal."

The National Shooting Sports Foundation, the gun industry's trade group, cheered the legislation. The group said the actions of big banks are a threat to the long-term stability of the gun industry and accused banking executives of engaging in an "abuse of American trust and taxpayer dollars."

"American taxpayers need to be reassured their tax dollars that subsidize insurance and bailout policies for banking institutions aren’t weaponized in an attempt to eradicate a lawful industry because it has fallen out of favor with boardroom bureaucrats," Lawrence G. Keane, senior vice president of the group, said. "Senator Cramer's leadership in confronting this issue guarantees social policies are debated and created by the elected officials Americans vote to represent their interests, not by faceless corporate boards representing the interest of the few."

The bill has been referred to the Senate Banking Committee, but the text has yet to be made public. It's unclear when, if ever, the bill will receive a hearing.