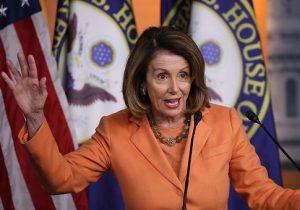 House Minority Leader Nancy Pelosi (D., Calif.) called the Republican tax reform bill "brazen theft" on the floor of the House of Representatives shortly before the bill passed, adding it "does violence" to the vision of the Founding Fathers.

"This GOP tax scam is simply theft–monumental, brazen theft–from the American middle-class and from every person who aspires to reach it," Pelosi said on Tuesday. "The GOP tax scam is not a vote for an investment in growth or jobs, it is a vote to install a permanent plutocracy in our nation. They'll be cheering that later."

Pelosi went on to say the tax bill "does violence" to the vision of America's Founding Fathers and "disrespects the sacrifice" of the service of men and women in uniform.

The Founding Fathers protested unfair taxation from the British empire and wound up leading a revolution.

"It betrays the future and betrays the aspirations of our children. It demands–it morally demands a ‘no' vote from every member of this House of the people," Pelosi concluded.

Shortly after Pelosi's vocal opposition to the tax reform bill, the House passed the final version of the Tax Cuts and Jobs Act, which now moves to the Senate for a vote before President Donald Trump will have the opportunity to sign it into law, the Washington Free Beacon reports.

The final compromised legislation includes reducing the corporate tax rate from 35 to 21 percent, keeping the number of tax brackets at seven but reducing the rates to 0, 10, 12, 22, 24, 32, and 35 percent, and increasing the Child Tax Credit from $1,000 to $2,000 for singles and married couples. The bill also eliminates the Affordable Care Act's individual mandate, which requires that individuals purchase health insurance or pay a penalty to the IRS.

UPDATE: 3:56 P.M.: This article was updated with more information about Pelosi's remarks about the Founding Fathers.