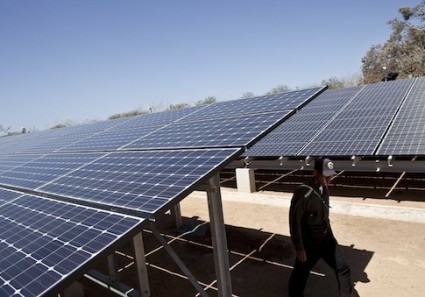 The New York Times is concerned that a foreign energy company with powerful political allies in the United States and a multi-million-dollar lobbying footprint could lose out on federal subsidies if Congress does not renew a special interest tax break.

The company, Spanish solar firm Abengoa, is operating two solar plants in Arizona and California. It received billions in taxpayer support to build them. Now it’s warning that it could give up on the United States if taxpayers don’t shell out more subsidies.

With the impending expiration of a tax credit for investment in renewable energy projects, Abengoa says it has no plans to build more such plants in the United States.

That’s too bad, the Times says, "because the industry had been creating thousands of new jobs every year." But according to two employees, one at each of Abengoa’s southwestern solar plants, those jobs primarily went to foreigners.

The two former employees, who spoke with the Washington Free Beacon last year, alleged widespread illegality on the company’s part and violations of the terms of two stimulus funded Department of Energy loan guarantees that financed the plants.

Both said that the company routinely awarded jobs, even for custodial and administrative positions, to Spanish and South American applicants, in violation of DOE "local first" requirements that instructed them to hire from surrounding areas.

"What I came to realize, and it took me a while because I didn’t want to realize it, is that they understood. They knew the law. They didn’t care," said Lydia Evanson, the former human resources director of Abengoa’s construction and engineering subsidiary.

"I really came to believe that they’re so politically connected that it’s just hubris and arrogance," Evanson said.

The company’s political connections, and those of the solar energy industry generally, are vital to its continued viability, the Times suggests.

"As a result [of declining federal subsidies], utility-scale development, which accounted for almost two-thirds of the nation’s solar capacity installed last year, according to industry estimates, could drop off."

Congressional reluctance to extend solar energy subsides comes despite a massive lobbying effort. The three entities mentioned in the Times story—Abengoa, BrightSource Energy, and the Solar Energy Industries Association—have together spent more than $17 million on lobbying during the Obama presidency, including more than $2 million last year.

Pacific Gas and Electric, the utility buying power from Abengoa’s Mojave solar plant, also has long-term deals with BrightSource, a company with deep ties to the Obama White House.

Like the solar companies from which it buys power, PG&E is rife with political connections, and used those connections to advance the interests of its green energy power providers in private conversations with the White House.