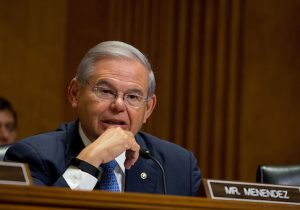 CBS, NBC, and ABC all began their programs discussing Hurricane Irma before reporting on President Donald Trump's decision to support a short-term debt-ceiling extension or providing an update on the recovery efforts in Texas for Hurricane Harvey victims.

"CBS Evening News" led off with a story about Hurricane Irma, followed by:

NewsBusters noted that the ABC and NBC morning shows also ignored the trial Wednesday morning, while "CBS This Morning" did a brief blurb on it.

Prosecutors allege that Menendez "sold his office" for lavish vacations and gifts in return for political favors on behalf of his friend Dr. Salomon Melgen, a wealthy Florida ophthalmologist. Menendez has professed his innocence and believes he will be vindicated.

While Sen. Cory Booker (D., N.J.) was on hand Wednesday in the courtroom to support his fellow New Jersey lawmaker, other Senate Democrats have showed reticence to comment on the trial.

Fox News, CNN and MSNBC, however, have covered the trial this week. MSNBC's Ari Melber said Wenesday the case appeared "overwhelming" against Menendez, while CNN's Jake Tapper previewed the trial on Tuesday's edition of "The Lead." Fox's "Special Report" also had a full story on the case on Wednesday evening.

UPDATED 2:52 P.M.: This story was updated with information about Fox News, CNN, and MSNBC's coverage of the trial.