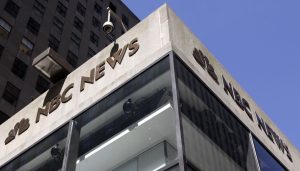 NBC News ran a segment during their Nightly News program last week that incorrectly said criminals can legally manufacture guns for their own personal use.

"This is a real gun and anyone can buy it, no background check required," Jeff Rossen, NBC News national investigative correspondent, said as the segment opened. "It's perfectly legal."

In an accompanying piece on the NBC News website titled "Loophole Lets Criminals Buy Untraceable ‘Ghost Guns' Online," reporter Lindsey Bomnin claimed that because the guns in question are unfinished when shipped to the customer it is legal for anyone, including criminals, to legally finish the manufacturing and assembly of the guns.

"The guns are built from kits and arrive in pieces, so under existing law, when they're shipped, they aren't guns," Bomnin wrote. "When assembled by their buyers, they're lethal—and legal."

However, the Bureau of Alcohol, Tobacco, Firearms, and Explosives (ATF) confirmed to the Washington Free Beacon that this is incorrect. Despite what NBC News claims, felons and other people considered "prohibited persons" under federal and most state laws are not legally allowed to manufacture and possess their own firearms.

"It is illegal for a prohibited person to have a firearm or ammunition," ATF spokesperson Ginger Colbrun said. "They can NOT be in possession of a firearm."

While ATF agent Graham Barlowe is quoted in the NBC News piece warning that some criminals are attempting to manufacture guns with the kits in question, Colbrun said federal law already prohibits them from doing so.

"We are not claiming it is legal," she said. Agent Barlowe "was pointing out how prohibited individuals are skirting the background check because they won't pass them."

Though the Nightly News segment claims "Ghost Guns" are "being used in shootings across the country from Maryland to California," the ATF said it doesn't have any data on how often unmarked guns are actually used in crimes.

"It is hard to capture," Colbrun said. "Oftentimes when local LE come across unmarked firearms they do not report them/request a trace on them because they do not have the traditional markings required for a trace."

NBC's depiction of the process required to finish the kinds of guns available in the kits in question has also come under criticism from former ATF agent Rick Vasquez, the man who assembled the gun kit featured in their report. Vasquez said he spent about eight hours with the NBC crew for the report but while he said it wasn't taken out of context, he still felt the piece didn't accurately show the manufacturing process he undertook.

"Nothing that I said was misrepresented. There just wasn't enough depth," Vasquez told the Free Beacon. "I wish there had been more discussion about the actual manufacturing of the firearm."

During the segment, Vasquez is briefly shown assembling the AR-15 kit NBC News had purchased.

"All the parts you need come together in the box," Rossen said in a voiceover as Vasquez is working. "In fact, the part that makes it a gun even comes 80 percent complete. So, it takes him just a couple of hours to put it together."