Number of Muslims to outpace Christians by end of century

The Muslim population is the fastest-growing religious group in the world with adherents of Islam set to eclipse the number of Christians by the end of the century, according to the Pew research firm.

The disclosure of these statistics comes on the heels of a fierce national debate about Muslim immigration to the United States and the threat of potentially allowing terrorism-linked individuals to obtain citizenship.

The United States is expected to grant at least 660,000 green cards to immigrants from Muslim-majority nations within the next five years, according to 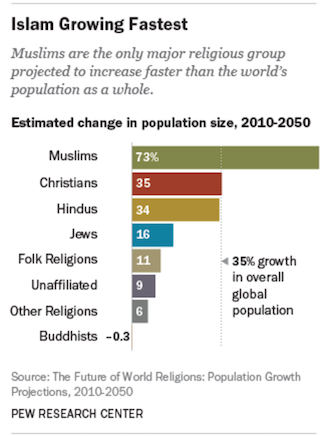 Pew researchers found that "Muslims are the only major religious group projected to increase faster than the world’s population as a whole."

"While Islam is currently the world’s second-largest religion (after Christianity), it is the fastest-growing major religion," according to Pew. "Indeed, if current demographic trends continue, the number of Muslims is expected to exceed the number of Christians by the end of this century."

The Muslim population in Europe also is quickly growing, with Pew projecting that "10 percent of all Europeans will be Muslims by 2050."

Demographic data compiled by Pew indicates "that Muslims will make up 2.1 percent of the U.S. population by the year 2050, surpassing people who identify as Jewish on the basis of religion as the second-largest faith group in the country," according to the research.

The debate over immigration is unfolding as Congress prepares to approve a sprawling yearly funding bill that will provide the financial resources for the U.S. government to enact Obama administration plans to accept up to 10,000 Syrian refugees.

Some lawmakers on Capitol Hill have noted that the spending bill will allow the Obama administration to approve green cards, asylum, and refugee status to around 170,000 migrants from Muslim countries during the next year.

Those immigrants and refugees granted green cards "have instant access to federal welfare and entitlements, along with local benefits and education services," according to a release from Sen. Jeff Sessions (R., Ala.). "These costs are not offset."