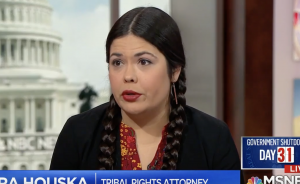 An MSNBC guest claiming to be a witness at the viral dust-up involving a group of Kentucky high school teenagers and a Native American elder admitted Monday she missed a crucial portion of it and repeated unproven claims that the teens chanted "build that wall" and "surrounded" Phillips.

A group of Covington Catholic high schoolers, many of them wearing "Make America Great Again" hats, were filmed seeming to taunt Nathan Phillips, a Native American and veteran, near the Lincoln Memorial in Washington, D.C. on Friday. However, additional video and reporting over the weekend created a far more complex picture.

Tribal rights lawyer Tara Houska was an organizer of the Indigenous People's March and said she was there Friday with members of Sen. Bernie Sanders' (I., Vt.) office to film a video about the plights facing indigenous women.

"I saw the elder that was there, Nathan Phillips, and the people around him, but I didn't realize what would end up happening, which was them surrounding him, chanting ‘build the wall,' and a youth standing directly in his face, in a very leering, aggressive manner," she said.

She then acknowledged she saw none of this firsthand.

"You had walked away prior to that point happening," MSNBC host Hallie Jackson said.

"I personally kind of felt unsafe," Houska said, saying she felt the "energy in the air change" and had asked a man to escort her away.

There has been no video showing anyone chanting "build the wall," and Phillips by his own admission walked into the crowd of students, who were waiting to be bussed away. The students were in town for the annual "March For Life" against abortion.

Houska said she rejected high school junior Nick Sandmann claim's he was trying to defuse the situation and said he was "clearly mocking" Phillips. The image of Sandmann smiling as Phillips beat his drums inches from his face went viral along with the video itself. Phillips said he felt threatened and blocked from moving, while Sandmann said he was trying to calm things down.

"Clearly those students have no idea who Native American people are, to surround an indigenous elder and chant ‘build the wall,' kind of exposes that it really has nothing to do with border security," Houska said. "It seems like it's an issue of race and white supremacy."

"To see that kind of level of antagonism and hate, you know, you can't fake that," she said.

Jackson alluded to conservatives having a different take on events based on other videos, but she never pushed back on the fact that there has been no video of any students chanting "build that wall" at Phillips.

Phillips' story changed over the weekend. His initial claim to the Washington Post was that he saw the teens beginning to taunt the indigenous peoples near the Lincoln Memorial and tried to walk towards the monument before being blocked:

Phillips, who was singing the American Indian Movement song that serves as a ceremony to send the spirits home, said he noticed tensions beginning to escalate when the teens and other apparent participants from the nearby March for Life rally began taunting the dispersing indigenous crowd.

Phillips said a few people in the March for Life crowd began to chant, "Build that wall, build that wall," though such chants are not audible on video.

"It was getting ugly, and I was thinking: ‘I’ve got to find myself an exit out of this situation and finish my song at the Lincoln Memorial,’ " Phillips recalled. "I started going that way, and that guy in the hat stood in my way, and we were at an impasse. He just blocked my way and wouldn’t allow me to retreat."

Much of the initial social media outrage centered around the notion that the crowd of teenagers, mostly white, had surrounded, intimidated and mocked Phillips. However, other video shows Phillips approaching the crowd while beating on his drum and then stopping directly in front of Sandmann, as opposed to the idea the teens all mobbed around Phillips.

Sandmann released a statement saying he was confused at being approached by Phillips and denied any racist intent or actions by him or his classmates. He also said he and his friends were engaging in school cheers before Phillips approached, in response to the expletive-laden taunts being thrown at them by a nearby group of extremists known as Black Hebrew Israelites, which is on video.

Phillips' story changed on Sunday, with him telling the Detroit Free Press that he purposely stepped into the crowd to defuse tensions between the Covington Catholic students and the Black Hebrew Israelites. Either the Washington Post didn't mention that in its report or Phillips left that out of his initial description of events:

"They were in the process of attacking these four black individuals," Phillip said. "I was there and I was witnessing all of this … As this kept on going on and escalating, it just got to a point where you do something or you walk away, you know? You see something that is wrong and you're faced with that choice of right or wrong. "

Phillips said some of the members of the Black Hebrew group were also acting up, "saying some harsh things" and that one member spit in the direction of the Catholic students. "So I put myself in between that, between a rock and hard place," he said.

But then, the crowd of mostly male students turned their anger towards Phillips.

"There was that moment when I realized I've put myself between beast and prey," Phillips said. "These young men were beastly and these old black individuals was their prey, and I stood in between them and so they needed their pounds of flesh and they were looking at me for that."

While there is no video of the students chanting "build the wall," some of them could be seen doing the "tomahawk chop." One member of Phillips' entourage could be heard telling the high schoolers they stole their land and should return to Europe.

Multiple commentators and writers acknowledged rushing to judgment based on the initial video and reports on the situation.

"If the Covington Catholic incident was a test, it’s one I failed—along with most others," writes @JayZeeCincy https://t.co/kvPu0PIRKh

There are two sides to every story. I made a snap judgment based on a photograph & I know better than to judge a book by its cover. I wasn’t there. I shouldn’t have commented. I’m glad there wasn’t violence. I hope theses two men can meet and find common ground as can WE ALL! pic.twitter.com/R20v9ot2Ey

Hey guys. Seeing all the additional videos now, and I 100% regret reacting too quickly to the Covington story. I wish I’d had the fuller picture before weighing in, and I’m truly sorry.

Yesterday I had one impression of the maga kids from Kentucky. Now after seeing more videos I have a different more complicated impression. Makes all the hot takes seem silly.

I apologize to the Covington Catholic boys. What Rod Dreher says of himself goes double for me. I jumped the gun and that was stupid and unjust. It is I, not the boys, who needs to take a lesson from this.