More than 1,000 illegal aliens were previously found on the voter rolls in just eight Virginia counties

A public interest legal group has discovered more illegal aliens on the voter rolls in Virginia.

The Public Interest Legal Foundation, an Indiana-based group that litigates to protect election integrity, provided the Washington Free Beacon with several examples of illegal immigrants on the voter rolls in Virginia. The examples were unearthed as a result of the group's efforts to ascertain the total number of noncitizens on voter rolls.

PILF provided a voter registration form showing that the registrant answered "No" to the question, "Are you a citizen of the United States of America?" All personal information on the form has been redacted. 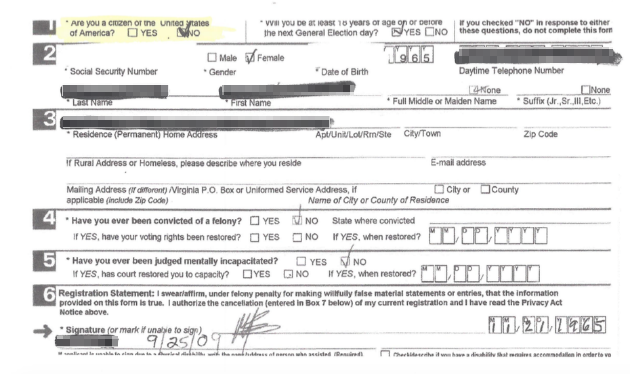 In a second example provided by PILF, the registrant did not answer the citizenship status question. 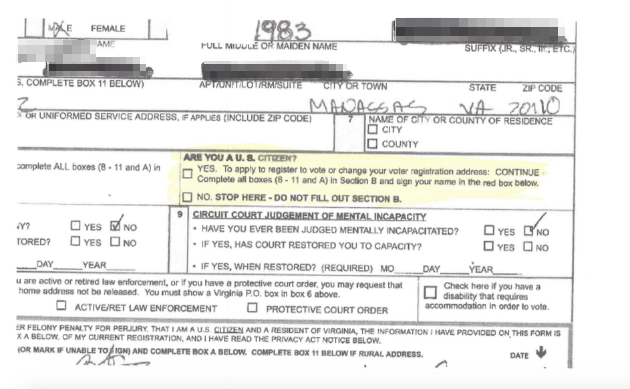 In a third example, the registrant did not answer if he was a U.S. citizen, did not mark his place of birth, and refused to say if he had been convicted of a felony. 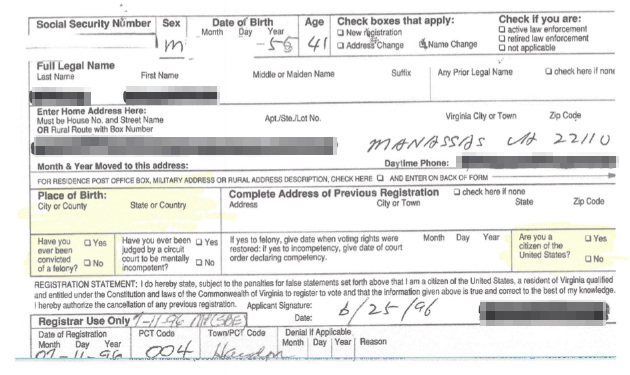 All three voters were found on the voter rolls in Manassas, Virginia.

PILF announced in late January that it had settled lawsuits against the City of Manassas and Chesterfield County. The lawsuits were initiated after the jurisdictions refused to provide the group with voter information. The settlement included the disclosure of the total number of noncitizens registered to vote in the Virginia locales.

"These are positive steps toward quantifying the true extent of noncitizen voter registration in Virginia," PILF President and General Counsel J. Christian Adams said after the settlement. "Washington and Richmond alike are positioned to consider various election integrity reforms and are right to do so. Those discussions deserve precise data like we’ve obtained."

PILF released a report last year that found more than 1,000 illegal aliens on voter rolls in just eight Virginia jurisdictions that responded to records requests from the group. Twenty percent of the more than 1,000 individuals voted, according to the group.

This report led to a bill that would have required investigations of jurisdictions whose voter rolls contain more registered than eligible voters. Virginia's Democratic Gov. Terry McAuliffe vetoed that bill.

"It's bad enough that more than a thousand people were removed from the rolls over concerns they did not meet citizenship requirements after the fact," PILF's communications director, Logan Churchwell, told the Free Beacon. "None of these were referred to prosecutors, either."

"Now we're beginning to understand larger internal failures in Virginia's rolls. Some of the people removed were registered to vote in the 1990s and remained, many voted, until their discovery in between 2011 and 2016," Churchwell continued. "The honor system governing Virginia's voter registration procedures is obviously lacking. Until the Commonwealth gets serious about verifying citizenship up front, election officials will continue to maintain voter rolls based on accidental admissions."

PILF's updated list of illegal aliens on Virginia voter rolls will be released in the near future.

The City of Manassas did not provide a comment.