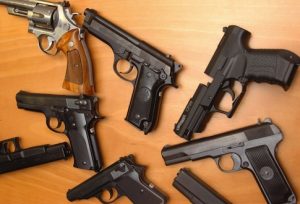 James and Julie Attaway are asking for an injunction from the U.S. District Court for the Western District of Missouri's Western Division against the Missouri gun regulation. The licensed foster care providers are currently fostering a child alongside their own biological children. They are legally allowed to own firearms, and James has a valid concealed-carry permit but have been made to keep their firearms unloaded inside their own home because of their decision to foster.

They argue the regulations make them and their children less safe.

"As parents of biological children and foster children, one of our top priorities is to provide a safe, loving place for them to grow and develop," James Attaway told the Washington Free Beacon. "Our hope is that the state of Missouri would allow their well-trained foster parents to use the same prudence they would with their own children when it comes to carrying and storing firearms. Prohibiting all foster parents from carrying concealed firearms or storing ammunition with firearms in the same locked safe strips foster parents of the ability to defend themselves and their children, foster and natural, from threats both inside and outside the home."

The couple is joined in the suit by the Second Amendment Foundation. They said the regulations "amount to deprivation of civil rights under color of law" and are similar to other laws they've challenged in Michigan and elsewhere.

"This is familiar ground for us," Alan M. Gottlieb, founder of the group, said in a statement. "We have successfully challenged similar regulations in other states when we find them, because there is a significant question about the constitutionality of such prohibitions. We believe this is an unconstitutional provision in Missouri's Code of State Regulations. It is important for the court to take action to protect the rights of Missouri residents who open their homes and hearts to foster children for whom they wish to provide a stable environment."

The Attaways said they're concerned the gun regulation, which they described as "unconstitutional," may be scaring off other potential foster parents.

"The foster system in Missouri is in need of qualified, loving families to take children into their home," James Attaway said. "Many families who value their Second Amendment rights to self-defense are deterred from applying to be foster parents. We were not allowed to continue with the licensing process until we agreed to abide by the department's firearm policy while foster children were placed in our care. We ultimately agreed and finished our licensing process, and while having a foster child in our home, we have had to abide by these unconstitutional policies for fear of losing our foster care license."

The couple said their goal is to change the regulations so they and other foster parents don't have to choose between being legally armed and caring for foster children.

"We are pursuing this legal action so that we, and other families who feel called to care for foster children in their home, don't have to decide between retaining their Second Amendment rights and caring for children in need," James Attaway said.