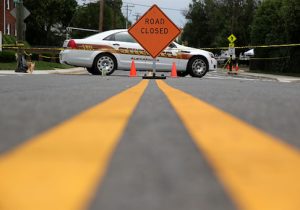 In the wake of Wednesday's attack on Republican congressmen at a park in Alexandria, Virginia, a number of national media outlets have published activists' claim that there have been more than 150 mass shootings in the United States so far this year.

The Washington Post, Fortune, the Huffington Post, Bustle, and MSNBC all cited the figure in pieces related to the attack on the congressmen. The figure was calculated by the Gun Violence Archive which was founded as a non-profit in 2013 with the intention of building on work tracking gun violence started by the liberal political magazine Slate. By their count, there have been 154 mass shootings so far this year.

However, the Gun Violence Archive counts any shooting attack where four or more people are injured as a mass shooting. This is a looser standard than the FBI standard for mass murder which they describe as "a number of murders (four or more) occurring during the same incident, with no distinctive time period between the murders."

Only 8 of the 154 incidents the Gun Violence Archive meet the FBI standard for mass murder.

The results were similar in 2015 when the Washington Free Beacon analyzed media coverage of mass shootings in the wake of the San Bernardino terror attack. At the time, national media outlets were circulating similar mass shooting numbers created by a group of gun control activists on Reddit. The subreddit, sarcastically named Guns Are Cool, similarly defined a mass shooting as any shooting attack where four or more people were injured but they also included the attacker's injuries in their count leading to an even larger number.

Guns Are Cool said part of its goal is to influence media coverage of mass shootings which their count puts at 196. Some of the outlets which focused on the Gun Violence Archive count also included the Guns Are Cool count in their pieces.

For their part, the Gun Violence Archive says it hopes the information it publishes "will inform and assist those engaged in discussions and activities concerning gun violence, including analysis of proposed regulations or legislation relating to gun safety usage."

Confusion over what constitutes a mass shooting is likely to continue as the FBI and other law enforcement agencies have no official definition.

Though the FBI does not have an official definition for mass shootings, it has studied "active shooter incidents" that involve "an individual actively engaged in killing or attempting to kill people in a confined and populated area." In one report, they found that between 2000 and 2013 there were 160 "active shooter incidents." The FBI excluded gang-related shootings from their count, but included incidents where nobody was shot or killed.

The remaining two include the shooting at the Fort Lauderdale Airport and the murder of five Fiamma Inc. employees in Orlando, Florida.

None of the outlets who cited the figures compiled by the Gun Violence Archive or Guns Are Cool noted the origins or motivations of the two groups, though most did note that other definitions of the term "mass shooting" exist.