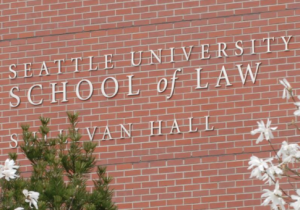 The dean of Seattle University's law school revoked the school's scholarship of a Federalist Society event, arguing it could be "harmful" to minority students to hear a conservative viewpoint.

The law school's Access to Justice Institute holds "Social Justice Mondays" in conjunction with campus groups to promote various pro bono causes. The school's chapter of the Federalist Society, a national organization that promotes originalism in the context of constitutional interpretation, was scheduled to hold a debate on illegal immigration.

A petition on Change.org from the "Seattle University School of Law Direct Action Committee" called on the administration to cancel stop the debate. The group argued the event would be "harmful" to "undocumented students."

The petition netted over 200 signatures. After this writer called attention to the petition on Twitter, it was scrubbed and embedded with the identifying tweet.

Nonetheless, the petition worked. Law school dean Annette Clark announced to students in a Thursday email that while the event wouldn't be canceled, it would "go forward under the sole sponsorship of the Federalist Society."

Clark noted that President Donald Trump's decision to rescind DACA "generated great fear within vulnerable immigrant communities and has caused real harm, making discussions of immigration policy that include a conservative viewpoint even more painful and anxiety- and anger-producing for those individuals and families who are at risk (and for their allies)."

The school "miscalculated and erred," Clark said, saying that the Access to Justice Institute should have asked "marginalized" students their thoughts before sponsoring the event.