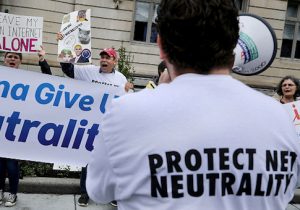 The net neutrality debate is a complicated one, so naturally many of the loudest voices against its repeal last year resorted to doomsday rhetoric.

Friday marks one year after the vote by the Federal Communications Commission to undo the Obama-era rules that some called the "end of the Internet as we know it."

Net neutrality imposed by the Obama administration classified ISPs (Internet service providers) as public utilities rather than information services and subjected them to broad regulations. Supporters fretted that ISPs, without proper oversight, would throttle certain connections and prioritize their own video-streaming services, for instance, rather than treating all sites equally.

The rules didn't officially expire until June 11, 2018, but that didn't prevent alarmist predictions pouring in from around the web.

A CNN headline declared the "end of the Internet as we know it" on the day of the vote, with the subhed, "Trump's FCC repeals Obama-era net neutrality regulations intended to keep the web open and fair."

Left-leaning site Vice wrote last year "Net Neutrality Is Being Stolen From Us in a F—ed Up, Undemocratic Heist" and called the move an "undemocratic looting by telecom monopolists."

Sen. Bernie Sanders (I., Vt.) recorded a Twitter video calling it a "disastrous decision" and also the "end of the Internet as we know it."

This is the end of the internet as we know it. In Congress and in the courts we must fight back. #NetNeutrality pic.twitter.com/ExKx7LFZwj

Liberal late-night host Stephen Colbert said it was a "sad day" for Internet users and compared ISPs like Verizon and Comcast promising not to mess with traffic to sharks promising not to eat people. The show put the monologue on YouTube and entitled it "R.I.P. The Internet."

New York Times columnist Farhad Manjoo wrote last November the Internet was already dying and the repeal of net neutrality "would be the final pillow in its face."

In an impressive effort at intersectionality, abortion rights group NARAL called the repeal of net neutrality a "direct threat to reproductive freedom."

"Without it, our access to information about how to obtain an abortion or other #reprohealth services could be compromised," it tweeted last November.

Repealing #NetNeutrality is a direct threat to reproductive freedom. Without it, our access to information about how to obtain an abortion or other #reprohealth services could be compromised. https://t.co/tp0jkibVe5

FCC commissioner Ajit Pai told the Washington Free Beacon last year that the repeal would return federal regulation to a "rational approach" and would allow the Internet to be free of burdensome regulation:

Pai said his Restoring Internet Freedom Order would return the regulatory authority to the Federal Trade Commission, which can then investigate telecom companies for anticompetitive practices, such as blocking or throttling traffic.

"We, number one, want to make sure that ISPs are disclosing everything they do," he said. "And if there's truly something anticompetitive then the Federal Trade Commission can take action against anybody in the internet economy, not just ISPs, but anybody based on this longstanding authority. That's a much more rational way of handling these issues."

The FCC voted to begin the process to repeal net neutrality in May. Pai released his proposal Wednesday, giving the public and the commission more than three weeks to consider before the FCC takes a vote on Dec. 14.