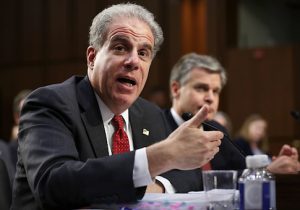 Disclosures by the Justice Department inspector general of political bias among FBI agents is focusing new attention on problems within the FBI's once-storied counterintelligence division.

FBI counterintelligence, the mission of identifying and countering foreign spies, for decades operated as a distinct specialty for FBI agents trained to deal with spies rather than fighting criminals and terrorists.

As a senior FBI counterspy, Strzok wields significant power through access to intelligence information held in secret FBI databases and through court-ordered surveillance.

Another sign of counterintelligence problems at the FBI was the disclosure in the IG report that the FBI did not take any action against Russian meddling in the 2016 election until late September 2016 – despite the fact that Moscow's operations had been underway since 2015.

The report said then-FBI Director James Comey directed the Counterintelligence Division to conduct a "multi-faceted effort" to protect the election from foreign interference.

"This tasking included the implementation of ‘a national supply chain risk management effort to identify vulnerabilities in voting infrastructure,' engaging state election officials about potential threats, the investigation of ‘whether foreign adversaries were attempting to interfere with or improperly influence the' 2016 election, and the investigation of certain U.S. persons’ contacts with foreign adversaries," the report said.

The IG report made public last week reveals that several FBI counterintelligence officials, not only Strzok, showed clear signs of political bias in their communications.

Most of focus of the IG, however, was on Strzok who was escorted out of FBI headquarters on Tuesday amid an internal investigation into his conduct during the Clinton email investigation.

The IG report described Mr. Strzok as one of the most experienced FBI counterspies, who was promoted during the email investigation of Hillary Clinton's private computer server from a Washington field officer supervisor to deputy assistant director.

Mr. Strzok led the email probe that began as a criminal investigation by the counterintelligence division but with an unusual twist – without a specific target. The lack of a target was unusual considering that all the emails found containing classified information were Ms. Clinton's. The probe known by the code name Midyear Exam listed "UNSUB," for unknown subject as the target.

The email probe began in July 2015 and a year later Mr. Strzok would be assigned to lead the FBI's investigation into collusion between Russia and the Trump campaign.

The Russia investigation was given a higher priority than the email probe raising further questions about politicization considering Strzok's criticisms of Trump in texts exchanged with Lisa Page, an FBI lawyer.

Mr. Strzok would eventually be assigned to the special counsel probe led by former FBI director Robert Mueller until his emails threatening the Trump campaign were uncovered. He was removed from the Mueller probe in July 2017.

Former FBI Assistant Director for Counterintelligence Randall Coleman, told the IG that not making Ms. Clinton the target of the email probe was unusual. "I don’t know [why] that was the case, why it was UNSUB. I’m really shocked that it would have stayed that way because certainly the investigation started really kind of getting more focused," he is quoted in the IG report as saying.

Mr. Coleman said Mr. Strzok was picked to lead the email probe because he was "one of the most experienced and highly-regarded counterintelligence investigators within the FBI."

Further evidence of politicization of the email took place after Andrew McCabe became deputy FBI director in early 2016. Mr. McCabe assigned Page, an FBI lawyer who was having an affair with Strzok, to be the deputy director's personal liaison to the email probe.

Mr. McCabe was fired by President Trump earlier this year, and the IG report raised questions about his impartiality in the Clinton email probe based on his wife receiving $675,288 from Clinton associate Terry McAuliffe in 2015 to run for office in Virginia.

The IG said the arrangement with Page was unusual and upset FBI agents on the case.

"Several witnesses told the OIG that Page circumvented the official chain of command, and that Strzok communicated important Midyear case information to her, and thus to McCabe, without Priestap’s or [FBI executive Michael] Steinbach’s knowledge," the IG report said.

The IG also said in internal FBI report criticized the Midyear probe and stated that FBI's Criminal Division should have conducted the probe as criminal rather than let the counterintelligence section handle it.

"The FBI's top counterintelligence official was unaware of possible evidence indicating Mrs. Clinton's private email server had been penetrated by a foreign adversary and unaware of relevant legal process obtained during the investigation," Goodlatte said.

Critics have said U.S. counterintelligence was weakened during the Obama administration. One example was the mishandling of the arrest of 10 Russian illegal spies in New York in 2010.

Instead of charging the deep cover "illegal" spies with espionage – they did not enjoy the usual diplomatic immunity afforded to legal spies – the 10 Russians posing as Americans were sent back to Moscow without being fully interrogated.

As a result, valuable intelligence on Russian spying operations was lost.

The Obama administration at the time was seeking to curry favor with Russia as part of the failed reset policy toward Moscow.

In contrast, during the Cold War, FBI counterspies achieved a major intelligence coup by recruiting as an informant the No. 2 official in the Communist Party USA, Morris Childs, who provided Kremlin and other valuable secrets between 1958 and 1982.

Michael Waller, an intelligence expert with the Center for Security Policy, said the IG report lays bare what some have been saying for decades: "The United States is the No. 1 target of every hostile intelligence service on earth."

"With few exceptions, the FBI has very little to show that it has the strategy and leadership to cut off much more than the low-hanging fruit," Waller said.

"It’s time to reorganize the whole FBI, retire a lot of the upper dead wood and fast-track the aggressive and capable younger field agents who think strategically and put the nation ahead of their careers," he added. "That will help give the FBI the new leadership the country so desperately needs it to have."

The IG report quoted Comey as concluding well before the email probe was ended that Ms. Clinton used the private email to discuss Top Secret information eight times and Secret data dozens of times. However Mr. Comey asserted that "there was no indication" Ms. Clinton knew sending the information was illegal, or that she intended to do so. He described it as a "fairly typical spill" of information.

Comey also told the IG that the same counterspies assigned to the email probe were working on the Russia probe and as a result were "overwhelmed."

"It was Russia, Russia, Russia all the time," Comey was quoted as saying, noting that he should have assigned "another Strzok" to the two investigations or even two separate teams of counterspies.

The IG questioned the assignment of Midyear probe members to the Russia investigation.

"We were surprised to learn that FBI leadership decided to assign many of the key members of the Midyear team, immediately after determining that no charges should be brought against then candidate Clinton, to the Russia investigation, which touched upon the campaign of then candidate Trump," the IG said in a footnote.

"This is particularly so given the questions being raised by candidate Trump and his supporters regarding the declination decision in the Midyear investigation. While we recognize that staffing decisions are for management to make, we question the judgment of assigning agents who had just determined that one candidate running in an election should not be prosecuted to an investigation that relates to the campaign of the other candidate in the election."

"Surely, the FBI’s Counterintelligence Division had talented agents who were not involved in the Midyear investigation who could have fully staffed the Russia investigation," the report said.

"Such a decision also would have eliminated the excuse we were given here about the Russia investigation impacting the ability of agents to address the Weiner laptop issue."

The report noted Strzok's "hostility for then candidate Trump and preference for a Clinton victory" in the text messages to Page.

Of particular concern was the Aug. 8, 2016 text from Strzok who told Page "we'll stop" Trump from being elected.

Communications from two other FBI counterintelligence agents, described in the report as Agent 1 and Agent 5, also raise concerns.

At one point after Comey sent the Oct. 28, 2016 letter to Congress reopening the Clinton email probe, Agent 1 told Agent 5 "Not sure if Trump or fifth floor is worse." The agent said the fifth floor was a reference to the Washington field office counterintelligence leaders.

Agent 1 was described as one of two agents who conducted the questioning of Clinton on July 2 that the IG said was tainted by the inclusion of two Clinton aides who were also witnesses in the email probe.

Agent 5 was described as an experienced counterintelligence agent who worked on a "filter team" to identify privileged communications among seized FBI documents to make sure the material was not reviewed by investigators.

The FBI response included a single reference to counterintelligence. An FBI working group has been set up to examine whether in the future "it would be beneficial to team agents from different components and backgrounds to leverage respective skill sets and experiences, e.g., drawing on the experience of public corruption agents when conducting counterintelligence investigations."

"Just as he has been for the last 20 years, Pete Strzok remains a proud FBI agent who wants to continue working to keep the American people safe," Goelman said.

"Pete has steadfastly played by the rules and respected the process, and yet he continues to be the target of unfounded personal attacks, political games and inappropriate information leaks," he added.