Member: 'It sounds to me like all they want is the money'

A hospitality union is still demanding dues payments from workers left unemployed by the coronavirus, threatening to cut off health insurance benefits for those who fall behind on payments.

UNITE HERE Local 11, which represents more than 30,000 hotel employees in Southern California and Arizona, has continued to request dues from laid off workers as the pandemic halts travel across the country. The union on Tuesday sent payment reminders to members via text message, telling many unemployed workers, "It is critical for you to keep paying your dues so that we can keep fighting." 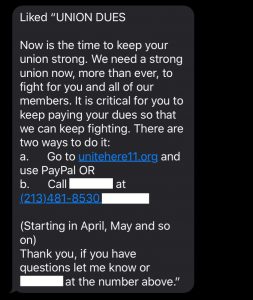 One current member, who recently lost his job at a hotel as California launched a statewide lockdown, called the union's practices "pathetic."

"It's kind of pathetic the way they're doing things.… It sounds to me like all they want is the money, and that’s it. They don’t care about their employees," the member told the Washington Free Beacon. "My phone company told my wife a couple days ago, ‘If you're not able to pay, we can always make arrangements. We can wait.' If other companies are doing this, why can't the union do the same thing?"

UNITE HERE Local 11 did not respond to a request for comment.

Although the member was laid off, the hotel extended health insurance coverage for workers through September. He was told by a union representative that those benefits are linked to maintaining dues payments, which ranged from $28 to $71 each month, according to its 2019 federal labor filings.

"I said, ‘Medical insurance, how is that gonna work?' [The representative] goes, ‘Oh well, you’ll be covered until September. Well, as long as you keep paying your union dues,'" the member said.

The text messages arrived as many American companies work to ease constraints on workers displaced by the virus. The Los Angeles-based STAPLES Center announced in March it would continue to pay hourly employees scheduled to work during canceled sporting events, a decision UNITE HERE Local 11 recognized on Twitter.

Members have also complained that union leaders have been difficult to reach during the crisis. Though the union's payment reminder message listed its Los Angeles office phone number for questions, the offices are closed due to the virus.

"Coworkers have sent me text messages saying that they couldn’t talk to anybody at the union, that the phone was always busy and nobody was answering. But someone sent them a text message saying they need to pay the union, regardless how," the member said. "I'm kind of losing hope. Nobody's doing anything about it."

"For Local 11 to expect struggling, out-of-work employees to continue paying dues is just disgraceful," she said. "Local 11 seems unwilling to see a drop in its dues revenue, regardless of whether or not its members can afford it."

Patrick Semmens, spokesman for the National Right to Work Foundation, said that threatening to withhold insurance benefits during a deadly pandemic demonstrated a "total lack of compassion" from local labor leaders.

"Sadly this is yet another example of the seemingly endless greed union bosses have for extracting dues from rank-and-file workers," he said. "As example after example demonstrates, union officials will lie, threaten and act with a total lack of compassion towards the very workers they claim to represent in order to line their own pockets."

UNITE HERE’s national organization maintains close ties to Democrats. The union has given nearly $7.5 million to Democrats since 2000, and just $256,900 to Republicans, according to the Center for Responsive Politics. The national union recently praised House Speaker Nancy Pelosi (D., Calif.), who has received more than $38,000 from the union since 1998, following the passage of the Coronavirus Response Agreement in March. The group also accused congressional Republicans of "shafting" workers.

UNITE HERE national representatives did not respond to a request for comment on Local 11's decision to pursue dues from recently unemployed members.

UNITE HERE Local 11 spent more than $800,000 on political activities and lobbying in 2019, according to its federal labor filings. It has also touted its involvement in national politics, saying it played a role "not just in local Democratic politics, but in the incalculably larger transformation of the American labor movement and the broader movement for economic justice." The union endorsed both Sens. Bernie Sanders (I., Vt.) and Elizabeth Warren (D., Mass.) in January.