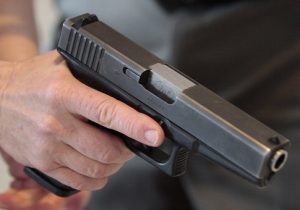 A pair of gun-rights groups called for a national dialogue between law enforcement and the gun-carrying community on Tuesday after a legally armed man was mistakenly killed during a shooting at a mall in Alabama last week.

The Second Amendment Foundation and the Citizens Committee for the Right to Keep and Bear Arms released a joint statement calling for police officers and law enforcement officials to sit down with gun-carry advocates and firearms trainers to discuss ways to prevent legally armed civilians from being shot by police during future incidents. The groups said the conversation was necessary to save lives of good Samaritans who are trying to defend themselves or others during attacks in public places. They said that while cases of mistaken shootings during attacks have been rare up until now, the prevalence of concealed carry means they could become more common if steps aren't taken to prevent them.

"There are more than 17 million gun owners in the United States who are licensed to carry concealed," Alan Gottlieb, founder of the Second Amendment Foundation, said in a statement. "In addition, there are untold numbers of legally armed citizens in states where permits or licenses are not required for either concealed or open carry. In an active shooter incident, these citizens are well within their rights to act in self-defense or in defense of others, even when it means they draw a defensive sidearm but don't immediately open fire."

Gottlieb said concealed carriers have ended attacks on public places across the country, even in recent months.

"Armed citizens have interrupted would-be mass shooters sometimes fatally shooting the perpetrator before police arrive," Gottlieb said. "This happened at an Oklahoma City restaurant, a Walmart in Washington State, and at a McDonald's restaurant in Birmingham in October."

He said police need to realize it's an increasing possibility that an armed civilian may also be responding to the attack they've been called in to stop.

"The likelihood that police may encounter a good guy citizen acting to defend himself or others has increased exponentially in recent years with the expansion of concealed carry," Gottlieb said. "We need to address the potential for mistaken identity fatalities so that good guys don't shoot one another while the bad guys get away. This dialogue should include law enforcement and commercial firearms instructors, open and concealed carry advocates and experts on the use of lethal force. We are working with Gun Talk Media on this effort."

Last Thursday's shooting is an example of the worst-case scenario for lawful gun carriers.

After a fight in the Riverchase Galleria Mall in Birmingham escalated into gunshots, a frenzy of Thanksgiving shoppers ran for shelter. Shots fired during the altercation wounded a 12-year-old girl and an 18-year-old man.

Nearby police responding to the shooting came upon Emantic Bradford, a 21-year-old black man, in the immediate aftermath of the altercation and fatally shot him.

Police in Hoover, Ala., initially reported that Bradford had been in the fight and had shot his opponent. Moments after Bradford was shot, a police dispatch reported "the shooter is down." Officials called the police's rapid response "heroic."

"Thank God we had our officers very close," Hoover police chief Nick Derzis initially told the Alabama Media Group. "They heard the gunfire, they engaged the subject, And they took out the threat. That threat could have materialized into a lot more people being injured. Thank goodness that did not happen."

In subsequent statements, police changed their account. "We regret that our initial media release was not totally accurate, but new evidence indicates that it was not," a spokesman told Alabama Media Group.

Police then said on Monday that Bradford was not the person who shot the victims and they had not apprehended or identified the actual shooter. They said, however, that Bradford "brandished" his firearm before police opened fire.

"Mr. Bradford brandished a gun during the seconds following the gunshots, which instantly heightened the sense of threat to approaching police officers responding to the chaotic scene," a release form the Hoover Police Department said.

Later that day police released another statement, clarifying that Bradford had not brandished a firearm, which generally involves displaying a firearm with an intention to threaten another, prior to being shot. Instead, the department clarified that Bradford was merely holding a gun in his hand when police encountered him.

"Earlier, we stated that Mr. Bradford ‘brandished' a gun," the department said. "To clarify, the word ‘brandish' was used because Mr. Bradford had a gun in his hand as police officers responded to the active shooter situation between mall patrons."

A lawyer representing Bradford's family told CNN that the victim had a valid permit to carry his concealed firearm. "My son was a loving—very loving—young man. He would give any of you the shirt off his back," his mother told reporters over the weekend. "He loved people, period."

An eyewitness account, recorded live in the moments after the shooting, told bystanders that police had shot the wrong man. "They shot that man down for no reason," an unidentified man in the video posted on Facebook said. "He probably got a gun license and everything. Police just shot him."

"Did they even say anything to him?" another bystander asked.

"They just seen the gun," a third witness who claimed to see the shooting replied.

"And they just automatically shot him?" the bystander asked again.

"It wasn't no shootout," the witness replied. "It was the police shooting them."

"That's not right," the bystander said.

Tom Gresham, host and creator of Gun Talk Media, said he plans to host conversations between law enforcement officials and gun-carry advocates as part of the effort announced by the gun-rights groups.

"Callers to my radio show over the last 20 years want to do this right," he said. "Both citizens who carry and conscientious police officers know this is a situation fraught with peril and all parties need to work together for solutions. The police we work with know this is a very real problem."

"We have an opportunity to learn from the Hoover incident," Gottlieb said. "Something good can come out of this terrible incident that will help police and millions of legally-armed private citizens reduce the likelihood of such a tragedy ever happening again."

Mikhael Smits contributed to this report.